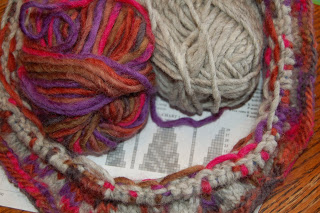 Sophie decided to knit and felt a cushion. It was to be a round cushion, about 15 inches across, grey background with something else producing a pattern on the grey. At our Local Yarn Shop she settled on these colours.

At home she dithered around trying to come up with a design she liked. Finally she decided she liked the fair-isle in-the-round pattern from the fall issue of Vogue Knitting magazine, intended as a dreamcatcher motif for the side of a purse. She changed the colours, adapted it to a cushion and cast on.

She’s never done anything close to this complex with her knitting, but all she required was a little bit of verbal instruction for the second row, the sort of pointers I could give while I was driving and she was knitting away in the passenger seat. Now she’s finished ten rows and the pattern is really starting to show. I’m at least as excited as she is to see it evolve. She does a great job with the tension of the stranding and doesn’t seem to have any difficulty reading and following the complicated irregular chart.

She’s waiting for her Ravelry invite to show up in her e-mail in-box and then I suspect she’ll be as addicted to the site as I am.

One thought on “Knitting a cushion”