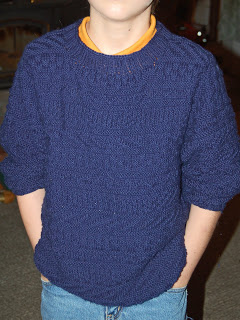 … because I’m knitting again. Noah’s sweater languished half-finished from March until September. A few days before his birthday, with crisp fall air outside, I picked it up and knitted it to completion like a maniac. Unfortunately the pattern measurements made it a little short in the arms. I was trying to finish it without him really noticing as a birthday surprise so I avoided, at my peril, measuring my work against my boy as I worked. Sigh. So I’m getting some more yarn and will frog out the sleeve caps and re-knit with two or three inches more length. But he likes the sweater, so it’s worth the little bit of extra work. (Sleeves are pushed up past the elbows in the photo … they’re not that short!)

Since then I’ve knit three or four hats and most of a Newfie Trigger Mitten. I hope to get the mitten gauge and pattern worked out. I’ve loved this design since I bought a pair for Chuck at a craft fair in St. John’s 20 years ago. We’ve lost one of the originals, and I’ve never been able to find a pattern for this design, so I’m using the remaining orphan mitt to experiment and try to come up with my own pattern. I think I’m doing okay so far. This one is turning out just like the original, except that it’s sized down for a youth thanks to yarn and gauge considerations. With bigger needles and an aran yarn, I think it’ll be a lovely pattern. It has the thumb and index finger in separate ‘fingers,’ with the three remaining fingers residing mittenesquely in the larger compartment. 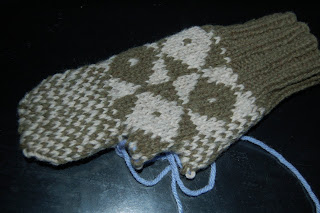 Last week I braved the dismal little craft store in Nelson looking for some knitting needles and possibly some new yarn. Oh my goodness … the place has a new owner and has been transformed! I spent almost an hour there drooling and came out almost a hundred dollars poorer, having spent only a tiny fraction of the money I had been tempted to spend. It is full of hand-dyed silk/merino yarn, funky bamboo-based stuff, blends of hemp and soy and wool, llama, alpaca, mohair, cotton/tencel and goodness knows what else, all in a zillion amazing colours and weights.