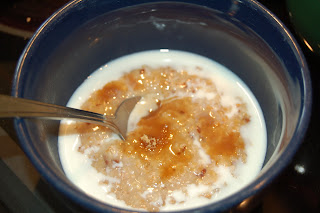 It was a good morning for porridge today, with the leaves starting to turn and a crispy feel to air, but our box of Red River Cereal was cobwebby and showing the telltale signs of invasion by little hungry six-legged things. I’d kept meaning to get around to dumping it in a mason jar, but somehow it was one of those things that never got done. So the last couple of cups (and any yummy grub-like things therewithin) went out for the chickens to eat. And I was left wondering what to cook up for breakfast. For whatever reason oatmeal porridge is not thought very highly of here, so that was out.

When I looked at the ingredients on the Red River Cereal box, though, I suddenly realized what anyone else with a Family Grainmill probably would have figured out at the outset … I can make this stuff! So I threw in a cup of hard red wheat, half a cup of rye grains and another half cup of spelt. I cracked them in the mill. Then I ground a couple of tablespoons of flax seed, and tossed a couple more tablespoons of whole flax seed in.

It cooked up beautifully, just like the packaged stuff, but fresher-tasting. With a teaspoon of brown sugar and a drizzle of milk, it was a perfect fall breakfast. I can’t believe I never thought to grind my own porridge meal before.