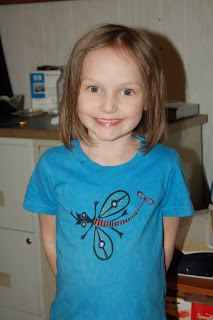 Fiona has been playing “The Two Grenadiers” on her violin every day for a month or more, polishing it up to play at the Music Festival in April. It’s very easy for her to play beautifully now, with lots of contrasts and energy.

A few weeks ago we had started some shifting and pre-vibrato exercises. Her left hand, which used to have a death grip on the neck of the violin, had softened up since she’d got her new violin. I figured it was a good time to start working with the left hand to get it even more relaxed. So we’d been doing “the wave” and “string polishing” and some motor patterning, where I guided her hand through an exaggerated vibrato movement.

Tonight as she played “The Two Grenadiers” I was marvelling at how much her hand had relaxed and opened up. As she came into the final, grand finale line of the piece I decided on something that I thought might give her a bit of a thrill. I waited until she played the open E-string right before the last note and then I shouted “vibrato!”

Well, she did it. She vibrated, after a fashion. It was wildly exaggerated (as a beginning vibrato should be) and it made her bow speed up (as is typical of a beginner’s vibrato). But the mechanics were basically correct, and she heard the sound it made.

You’d have thought it was Christmas morning — she was so excited! She ran around the house shrieking and telling her dad and her siblings what had just happened. When we picked Erin up from choir an hour later it was the first thing out of her mouth. She bounced, she giggled. She relished the feeling of pride she felt at having “vibrato’d my first time ever!”

It may be months before it happens again as beautifully. But tonight’s moment was priceless.

One thought on “Vibrato surprise”