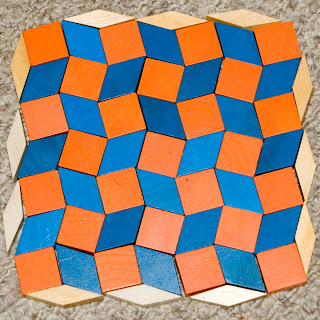 It was many years ago that I stumbled on a good deal for a mega-bucket of wooden pattern blocks. It was, I believe, from a The Shopping Channel catalogue. I remember this only because TSC is about the furthest thing from my normal sphere of awareness, but someone had discarded a printed catalogue at the post office and there, amidst the zirconium necklaces and thigh-masters, was this amazing wooden pattern block set. Erin would have been maybe four.

Here we are ten years later. Those pattern blocks are still played with. Not every day all the time. Sometimes weeks and months go by when they’re not touched. But then inevitably out they come again and are obsessed over for a couple of weeks at a stretch. They’ve been 3-dimensional building blocks, relief maps, snowflakes, Escher-type tesselations and figure-ground optical illusions, trains and trails and pictures, fractions and ratios. Paired up with two duct-tape-hinged unbreakable locker-mirrors, they’ve been reflected mandalas based on 60- and 120-degree angles. And sometimes they’ve been story-telling props. Lately they’ve been collaborative meditative diversions during read-aloud story-time.

Still patterning after all these years

One thought on “Still patterning after all these years”