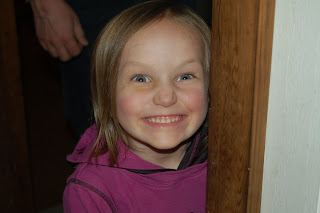 Erin had a friend, another young unschooled teen, staying over last night after our community orchestra performance. In the late evening we were all sitting around the fire reading, chatting, knitting, whatever. Fiona decided to do some math. She’s almost done the Miquon Red book now and was working through a page of combined multiplication and division. There were a lot of answers that were 12 in the first half of the page. She noticed how many there were and counted them up. “Wow, that’s a lot of 12’s. Ten 12’s.”

The general conversation around the fire went on for a moment. Erin’s friend J. was talking about something or other.

“That’s ten 2’s more than a hundred,” a little voice piped up. J. stopped talking and looked at Fiona.

“Ten 2’s is twenty,” continued the little voice. “So, a hundred plus twenty, that’s a hundred and twenty.”

J’s eyes bugged out. “Wow,” she said, “I could do that easily, but I’d still have to think about it. And I don’t know anyone who could have done that when they were four.”