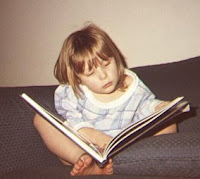 Tonight Fiona’s reading is showing evidence of having jumped some significant hurdle. She is on her way to fluency I think. When she figures out a word, whether on her own or with help, the learning sticks and she generalizes it to similar words. It’s a snowball effect. Last week the first set of Bob books suddenly became easy for her. This week she’s making her way through “Frog and Toad”. A huge jump. And that got me thinking about the first time I had a little [even more] precocious reader. There is Erin in the photo, at age 4 3/4, reading her way through a DK Eyewitness book. Nine years ago, almost to the day.

I had no intention of homeschooling my kids. We moved to our little town when Erin was born in part because we’d heard great things about the school and it was my assumption that she would go there. Other people knew better. Two different people, both of whom were new friends but people I felt a real affinity for, asked me out of the blue when she was about a year or two old “so, are you planning to homeschool?” I had absolutely no idea where their questions were coming from, and they couldn’t really explain other than to say “well, it just seems like the sort of thing you might do.” I thought that was ludicrous. There was a terrific school in our town. Why would we homeschool?

So we put her in preschool. She was shy. This was supposed to help her come out of her shell. She learned to smile and keep a stiff upper lip and was mutely co-operative and sweet-looking. She followed directions and was quiet and predictable. She seemed bright enough even if she didn’t talk, and the staff loved her. When I asked her what she thought of it, she said it was fine. Her only complaint was that “it takes up too much of my learning time.” By this she meant the time that she liked to spend at home reading, doing various projects (she was in the midst of a geography obsession) and practicing violin. Oddly enough she told me that her favourite time was circle time. That was an unexpected choice, since I knew she mostly preferred to be by herself and disliked large-group anything. It wasn’t until months later, after she’d stopped attending, that she explained that she liked circle time because it was the last part of the preschool routine before outside play, at which point she knew she could expect me to arrive for pickup at any time. It indicated that her misery and stress would end soon, that was all. But she didn’t tell me that at the time, because she knew she was supposed to be liking preschool. Gosh she tried hard to do so.

But I’m getting ahead of myself. She seemed to cope just fine and I didn’t have a clue how difficult it was for her to go and appear cheerful and comfortable and to try to do as expected. In retrospect the one good thing that came out of preschool was that I saw she could cope with school if she had to. And so if we chose not to have her there, it wasn’t because she “couldn’t hack it,” it was just that we’d chosen something different.

Because gradually it became clear that she did not truly enjoy preschool, even though she was trying hard to make it look like she did, because she knew she was supposed to. She had a terrible phase just before her fifth birthday. Stuff was falling into place like crazy in her brain and there were lots of changes — she’d suddenly leapt to reading at a very high level with complete fluency, her violin playing had taken off in a big way, she’d learned to ride a bike, and she had a new baby sister. She was staying up very late, getting up in the middle of night, listening to music at 3 a.m., even when I asked her repeatedly not to. She was testy and volatile during the day. Preschool, which she’d endured uncomplainingly for more than a year, suddenly didn’t seem worth enduring any more. She complained more and more about going, about the time it took up, about the unpredictable and aggressive behaviour of the other children.

As a mom of three kids under five, getting a reluctant four-year-old night-owl out the door for 9 a.m. preschool began to slip to the bottom of my priority list. She attended less and less, and became more and more reluctant. What she really wanted to do was read and read and read. At preschool they were concerned that all she did during her time there was look at books. I pointed out that she was reading fluently, hence her interest in books, and their response was to bring in a set of alphabet letters and attempt to test her mastery of the alphabet. She stared them down, stony and mute. At home she was delving into the second Harry Potter book but she didn’t want to perform for anyone.

That same fall we went to have a social dinner with the family of two of my Suzuki violin students. He was principal of the local K-12 school and she was the Grade 2 teacher there. They knew Erin from Suzuki group classes. “My gosh,” they commented, after listening to her talk, watching her read and then seeing her assemble some of their son’s Meccano by following the schematics. “What are we going to do with a kid like this? Do you ever wonder?” We, meaning the school.

I hadn’t wondered much, but I began.