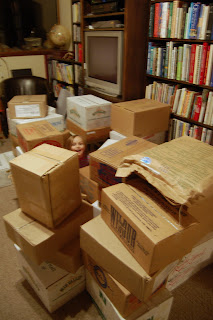 You may be familiar with the base level of mess that my house suffers from. Imagine the usual mess compounded by a weekend of rehearsals and performances, meals on the run, and then two days of full-on Christmas baking. Got the picture?

Now, on top of that add 75 bulk boxes of dried fruit, seeds and nuts. Here’s Fiona in the midst of the portion that is now in the living room. The remaining two thirds of the order is in the kitchen-dining area. The $10,000 order arrived today, finally, almost two weeks later than we expected, thanks to a series of unfortunate events. But it’s here, and the order seems to be complete, and we’re thrilled.

It’s not all ours, not by any stretch. It’s a fund-raiser for the regional Suzuki Assocation. We pre-sell a selection of products in 2- and 5-pound bags, and we order from Rancho Vignola in caselots. Then we pack and weigh the smaller amounts for distribution. That’s a job for tomorrow and Thursday. We’ll be using “Mr. Scale,” an ancient but bombproof hardware store scale (once used for weighing out five-penny nails, I think). Because this year’s order is so big, we thought it would be helpful to have another scale. So we borrowed “Baby Scale” from the medical clinic. Baby Scale is meant for weighing babies, but we also think it might be Mr. Scale’s baby.

We also pre-sell a lot of whole cases, on which the markup is much smaller, since there’s no packing and weighing involved. In this respect we almost operate like a buying club. Several of the return customers have orders over $500. I confess we count our own family amongst this group.

This year our family order consisted of hickory smoked almonds, pistachios, sunflower seeds, pumpkin seeds, dried apricots, dried cranberries, chocolate covered almonds, shredded coconut, walnuts, cashews (all in 5 or 10-pound amounts) and caselots of almonds, lemon pineapple fruit logs and pecans. Last week we took delivery of 80 pounds of fresh citrus fruit, and a week or two before that we got over 100 pounds of grains and beans. Our pantry overfloweth!

I love buying in bulk. It means we never have to worry about having staples around. It means
we can get wholesale pricing, which means fresh delicious organic food that is often cheaper than its grocery store counterpart. And the packaging … I just love getting 25 pounds of almonds in nothing more than a single cardboard box sealed with two metal staples and a single strip of packing tape.

5 thoughts on “Fruit and nuts”