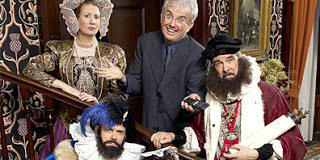 Thanks to Debbie for turning us onto this show. We’re not really a TV family, so we had no hope of catching it on the airwaves. But when the fifth season was released on DVD I decided we had to check it out.

The premise of the show is “what if TV had been around for the great events of history over the past 4,000 years?” Each show examines a historical event or personality by applying the subject matter to the format of modern day ads, talk shows, call-in shows, sitcoms and the like. Some informative background is given, and then the history is realized as comedy through terrific satirical sketches spoofing modern-day television.

Familiarity with television makes it all the funnier; there are spoofs of everything from 20/20 to Seinfeld to All in the Family to Martha Stewart Living. But the comedy stands alone too, so that my kids, who have never seen any of those shows, find it very funny. And if they ever do see Martha Stewart Living, I think they’ll recognize it from History Bites.

The intended audience is probably teens on up. There’s a fair bit of adult humour in here. But my older three kids are really enjoying it. And so are their parents!