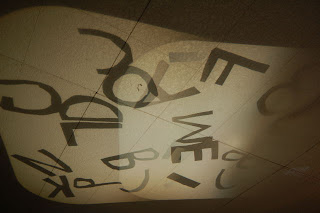 I can always count on my kids to come up with new ways of playing. The other day I had the overhead projector down from the loft. I was using it to enlarge the SVI logo onto painted wooden signs to help new registrants find their way to the school. As usual it took me a while to get around to packing the projector away again. Before I knew it, my kids were using it in all sorts of bizarre ways. Almost anything with light and shadow got tried. Shadow puppets made with hands or found objects, beam-splitting tricks using mirrors, colour mixing. Sophie spent an hour cutting out the whole alphabet from paper and the kids had fun projecting weird scrambly messages on the ceiling.

An invention the other evening was “Death Object Duel.” It was a game that got played somewhat surreptitiously over the course of time spent also doing other things. Noah and Sophie each picked an object to be their Death Object. Say, the wall-mounted pencil sharpener, or the wastebasket. The idea behind the game is to trick your unwary opponent into touching something that is in some indirect way physically in contact with their Death Object. (Walls, floor and fixed furniture don’t count.) Sophie set up a casual-looking pile of mess on the floor, with a beach towel at one end, that she hoped Noah would walk by and accidentally touch with his foot. On closer examination, the mess pile was somewhat linear, and at one end was a piece of yarn … that looked like it was heading towards the wall with the pencil sharpener!

Today I came home from a meeting with two very worn but still very functional thick school gym mats that had been heading for the dump. What a score! The kids have been asking for real gym mats for ages. I wonder what they’ll dream up to do with them.