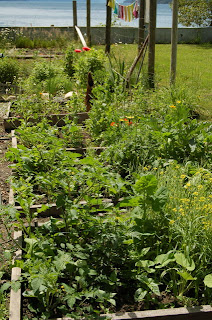 The really nice thing about the Gatto quote I used in my recent post is that it acts as a segué into any of a number of gardening-themed educational metaphors.

This is part of the GRUBS garden. Along this fence run a set of seven beds, each comprised of two 1×1 metre plots. These are the children’s individual beds. When we started the GRUBS club we were thrilled to get a huge donation of well-composted horse manure. We put most of that manure into these beds; the soil in them is probably 50% manure.

Each child plants what he wants in his bed and is responsible for tending the bed through the spring and summer. What a variety of beds there are! One is a spare, careful arrangement of a small number of different veggies. Another is a riot of voluntary nasturtiums, radishes going to seed, dill and basil. Some kids have huge lettuces, while others are going for height with the beans, peas and sunflowers. One child planted mostly turnips. Another bed is full of poppies and a massive gladiola. Other kids have planted a little bit of everything. Some kids have a lot of weeds; in some plots the radishes, cress and lettuces are way past their prime and are bolting to seed.

If the point of the GRUBS individual plots was to grow the maximum amount of marketable produce over the growing season, some kids would definitely be far in the lead. But for the children, and by extension for the adults who mentor them here, it’s not all about the product — it’s about the experience of having a garden. Every plot is fertile and productive in its own way. Some kids produce lots of attractive and useful vegetables, some produce beautiful flowers, and some produce some of each. But some kids don’t grow any of that. Last year Sophie grew almost nothing but radishes, which she doesn’t even particularly enjoy eating, and so she let most go to seed. It seemed a bit of a waste — until the end of the season, when we pulled out the dried-up plants. It turned out that what she excelled at was generating seed, and at planting time this spring, and at this year’s seed exchange, she was a hero with her large quantity of easter egg radish seed. The next generation of radishes has had a fabulous year, thanks to her. And then, there are the weeds. This spring one neglected plot became almost completely overgrown with weeds. One day as a favour Fiona and I sat down and weeded it out … and suddenly realized that around his handful of dwarfed tomato and pepper plants this boy had grown us a bumper crop of sumptuous chicken feed. Our chickens were thrilled.

Do you see where this is going? Classically Gifted Kids are like plots of dirt that produce beautiful vegetables and flowers. But every plot of fertile dirt, like every child’s mind, does a fantastic job of growing something. Maybe lowly but lovely turnips. Maybe radish seeds that will enliven countless other gardens in due course. Maybe just weeds, the purslane and lamb’s quarters that chickens will enjoy. But incredible, miraculous growth nonetheless.

Out of the dirt

2 thoughts on “Out of the dirt”