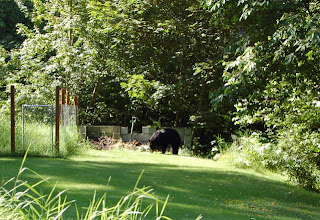 Drat, I thought we were done with these guys for the year. Usually once May rolls by, the bears have moved on to higher areas where the risk of human contact is lower. And I had hoped that with most of our food scraps going into the worm bin and the chicken corral, that there would be little in the main compost heap to attract bears. I will have to remind my other family members more often about not using the main compost except as a last resort. And this is just another reason to stop buying oranges. (Neither chickens nor worms will eat citrus peel.)

Last night Sophie was sleeping in a tent just to the left of the camera frame. Fortunately this bear seems skittish and not habituated to human contact. I expect it would have steered very clear of her. It ran off as soon as it heard my camera shutter.

Unfortunately it also seems to have made an attempt (failed, thankfully) to break into the chicken coop. The window was torn partly off its hinges, though one hinge held and the chicken wire screen inside would have provided an additional barrier. I’ve nailed the window shut for now.

Wish I’d had the zoom lens handy. You would have thought me very brave and/or very foolhardy with a zoomed in shot, but alas, the camera bag was still inside the minvan from last night’s parent-kid soccer game and party. Bears are certainly a fact of life around here, and we get used to them to a certain extent. They’re one reason we’ve wanted to have a dog around. I think we’ll need to get the air rifle out again this year. A pellet at 20 metres is enough to give a bear an annoying sting. With young bears especially it’s helpful if they have a few negative experiences with people and garbage. They’re smart, and they do learn to associate the two, so their behaviour won’t tend to become problematic. This bear looks like a 3- or 4-year-old. Not its first summer away from mama, but possibly its second. These days the wildlife officers don’t trap and relocate black bears. It’s extremely expensive to do so, black bears are far from endangered here, and the recidivism rate is quite high, no matter how high in the wilderness they’re released. Bears habituated to humans and residential areas are generally just shot. So in a sense shooting a bear with a pellet gun to give it a nasty sting is doing it a favour, giving it a chance to unlearn its problematic behaviour. But today I just shot this guy with a camera. I’ll give him another chance.