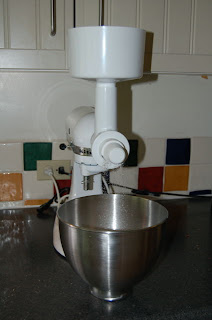 I love this baby. It’s a KitchenAid stand mixer, the lowly “Classic” model with the 250W motor. I got it for free with grocery store points back when Erin was a toddler. It probably gets used 5-10 times a week and it just keeps on trucking despite the fact that it does far more work that it’s technically supposed to be capable of. Mostly I use it for bread, lots of bread.

I never set out to become a home-baker of bread. Many years ago we got a breadmaker, from that same grocery store points program, and I learned for the first time about yeast rise cycles and bread recipes. I got kind of hooked on the push-button approach to home-baked bread. Store-bought bread was never quite as delicious, and it certainly didn’t evoke a sense of accomplishment.

Then one thunderstormy night our breadmaker got fried in a power surge. I discovered I missed fresh home-baked bread. At least I could still do pizza dough — I used the same recipe I’d always used in the breadmaker, and just set my mixer and dough hook to the kneading task. It dawned on me that it probably wasn’t that much more complicated to bake bread than it was to bake pizza crusts. But what a lot of effort that would be! I doubted it was worth it.

But then I bought a Really Big Bowl. Suddenly I could make four loaves of bread dough at once, for only slightly more fuss and bother than it had taken to make one loaf four times in the automatic breadmaker. Soon I was into a routine of traditional bread baking once or twice a week.

Nowadays I start with wheat berries, or sometimes a combination of wheat and rye wheat. I got a grain grinder attachment for the mixer a couple of years ago — the 325 or 475W models are recommended for the grinder, but my unit does just fine, thank you very much. I usually do this step the night before, and lately I’ve been starting an overnight sponge. So last thing before we start our readaloud each evening, I run the grain-grinder. After story time I mix the sponge.

The next morning I mix and knead the dough. I usually do three or four loaves at a time. My mixer will only handle about half that much dough, so I split it in two and hand-knead half while the other half gets kneaded in the mixer, then I trade the two lumps and carry on. I actually like kneading. It’s sort of a zen thing. 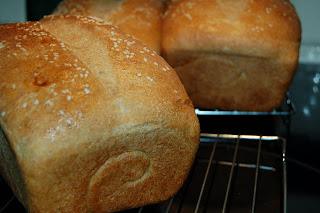 The bread goes through its three rises in the morning and by early afternoon we have piping hot fresh loaves. One usually ends up in the freezer, the others disappear over the next two or three days.

I use Laurel’s Kitchen Bread Book as my reference and the source of a few favourite recipes, though I improvise a lot. I can’t imagine going back to buying bread on a regular basis. My increasingly snobby palate demands the type of loaf that costs $4 a loaf, which I can’t bring myself to spend except in case of emergency.

My evolution into bread-bakingdom mirrors the way many other changes in my life have taken shape over the past decade and a half. They have crept up on me, gradually, partly due to serendipity, partly because they felt right. They have connected me more closely to the source of things and caused me to think of the implications of simple actions, of how choices we make ripple out into the rest of our lives and the world around us. They have encouraged me to live more mindfully, more deliberately and with more forethought. These changes accrue naturally, with a logic of their own, each taking root in the last. Sometimes I don’t think my old self would recognize me today.

8 thoughts on “Grain to bread”