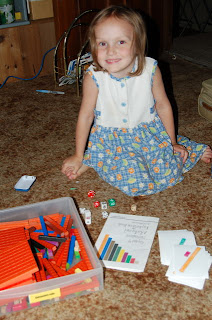 Sophie was four at a time when Noah and Erin were working through Miquon Math and Singapore Primary Math respectively. She got it into her head that four-year-olds should be able to do math just like their older siblings. I had seen immense value in the years of informal mathematical learning the older kids had done through life and play, and so I didn’t want to hurry her into a ‘program.’ I put her off and put her off. We played math games, like those in the “Family Math” book. That was fun, but she wanted to do A Real Math Book. So I made one for her. It was just a booklet of the sorts of games I thought would be fun for us to play together. We had a great time playing with it for a month or so. We played every last game until she mastered all the skills and concepts. “Now can I have a Real Math Book?” she asked. I couldn’t win. I caved in and bought her the Miquon Math books. (As it turned out, she did very well starting Miquon at 4 1/2. I thought it would be too much for her, but all those games had given her a solid grounding.)

Fast-forward four years. Fiona turned four while Noah and Sophie were both in the thick of Singapore Primary Math work. The middle kids are all eagerly progressing through their math programs with a lovely pre-bedtime ritual of focused time with me, and Fiona wants a part of that. Plus she just likes math, she really does. So the Cuisenaire Booklet and Cards that I put together for Sophie have found new life in our home. The math lab trays are out and getting plenty of use. Fiona is an eager math lab brat. She will play anything with cards and dice, but games with cards, dice and cuisenaires are the best of all. Sophie has been very helpful — she remembers these games fondly and still enjoys playing them, so she’ll often entertain Fiona for a round or two. I also tried to distract Fio’ with the Singapore Early Bird materials, Kumon follow-the-dots books and mazes. She finished them quickly and has repeatedly asked for something more substantial, more like what the big kids use.

And tonight we had tears that there was no Real Math Book to begin. Meaning Miquon. I will have to relent and order the first book for her. I will try, as always, to keep the Miquon work playful and discovery-based, r ather than workbook-centred. That’s really how it’s intended, which is why I like Miquon — it’s about as close to unschooling as a math program can get. Plus it’s a brilliant program for developing deep, logical and creative mathematical thinking, introducing all four operations within the first few months, developing algebraic-type skills early on, making extensive use of those brilliant cuisenaire rods as manipulatives. Although it wouldn’t have been my choice, the early start on Miquon doesn’t seem to have hurt Sophie any. She’s still an eager and capable little mathematician. Here’s hoping Fiona ends up the same.