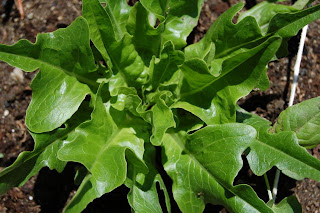 Since Fiona was born, the vegetable garden has really gone to weed. Really, really. I’ve half-heartedly thrown some seeds in a couple of springs, but most of my limited gardening time and energy has gone into the GRUBS garden. The soil is clayish and nutritionally depleted. The deer and crows and dog and bears were eating all our compost. My worm bin got destroyed by the dog. The garden fence got wrecked by a bear and then the dog made herself at home inside, digging and doing all the abominable things that Abominable Dogs do. The dog chewed up most of the low-flow irrigation system I’d been gradually investing in and installing. I really assumed that this year would be the same. Fiona wanted to plant a little garden and I figured I’d make up a little plot for her, do a little tending of the perennials, and leave it at that.

But against all odds some momentum is building. In tearing apart the old chicken shed I salvaged enough boards to build Fiona a Square Foot Garden style raised bed. Then Sophie wanted one. Then Noah. I found some side-cuts in the forest and built three more beds. I used the wood chips the hydro crew had dumped beside our driveway last year when clearing trees from near the hydro wires as mulch for the pathways. I reconstructed the main parts of our bean trellis. 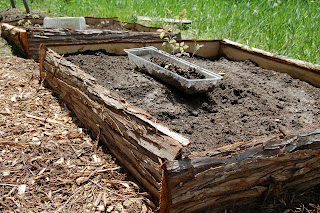 In mucking out the old chicken shed, I came up with four wheelbarrow-fulls of half-rotted chicken manure. I mixed it in with what was left of the winter’s compostable food scraps and a bunch of yard waste. Within three weeks the pile was rife with red wigglers. Things are really busy in there! We’ll have tons more compost in another month or two. And the compost pile from two years previously proved fully composted, yielding about 10 cubic feet of black gold. I added sand, peat, greensand and bloodmeal and created some pretty awesome soil for the raised beds. I replaced the fence the Abominable Dog wrecked. I pieced together enough hose that the A.D. hadn’t chewed to be able to water at least the raised bed area. 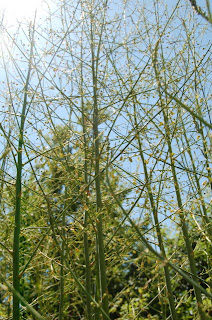 Even my much neglected perennials are doing encouraging things. I harvested only two lonely stalks from the overgrown asparagus bed this year, but look at the lovely ferny hedge they’re about to leaf out for me. The raspberries’ supports rotted through and fell over last winter, but they’re growing everywhere and just need someone to make them toe the line. They’ll then spend this year pouring out vegetative growth and next year we’ll reap the bounty. The strawberries and the rhubarb persist despite my neglect. Batch 4 of rhubarb muffins is on the slate for tonight. And the herbs! They’re taking over the lawn, much to my delight. Parsley, chives, lovage, peppermint, spearmint, lemon balm, oregano and thyme are all giddily battling each other for supremacy in the little kitchen garden, eagerly sending brave colonial delegations out onto the lawn, where walking and mowing result in a heavenly scent.

Feral herb garden and perennials discounted, we have only cultivated and planted a scant 100 square feet this year. And so I believe that we’ll avoid the mistake we’ve made so many times, of getting ambitious beyond the realm of practicality. For the first time in many years, it feels as if the gardening is going to be sustainable and will move over months and years towards more productivity. Can you tell how excited I am about all those red wigglers?

New beginnings in the garden

3 thoughts on “New beginnings in the garden”