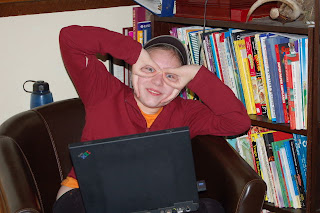 I think Erin actually likes the new math program I bought for her. She finished Singapore Primary Math at the age of not-quite-ten and then took a break. A long break. Two years and a bit, I think. About a year ago she finally delved into “New Math Counts 1”, the first in Singapore’s secondary program. She wrapped it up in about three months, but it clearly didn’t thrill her. I talked to her about finding something new but she wasn’t enthused about switching programs. She was convinced she liked Singapore and that it was just her motivation that was the problem. So I picked up NMC 2. She touched on it a couple of times last fall but time wore on and despite insisting in January that she didn’t want to scale back her goal, previously stated on her SelfDesign Learning Plan, of completing it this academic year, nothing happened.

A few weeks ago I started looking seriously at the Teaching Textbooks curriculum. I liked what I saw and the recommendations I read. It’s pricey, but I figured it was flexible and appealing enough that it would likely get used by at least a couple of my kids over the years, and possibly all four. I decided I would buy Algebra I, ostenibly for Erin, but mostly to check it out as a potential replacement for Singapore’s New Math Counts with my younger kids. I told Erin about it; her enthusiasm could have been measured with a micrometer, but she did agree to at least give the first chapter a whirl and let me know what she thought of it.

She was underwhelmed when it arrived. The textbook is intimidatingly thick and has almost two hundred lessons. She thought the CD-based whiteboard lectures were likely to be gimmicky and annoying. After a few nudges she read through the first three lessons in the textbook and did the problem sets that followed. Ho hum. It was kind of okay. Not bad, actually. Algebra is kinda cool, after all. It was probably her favourite part in New Math Counts.

She hunkers down in the tub chair with the laptop, in a hoodie and baseball hat, and works away. She actually almost seems to enjoy them. She’s asking for help enforcing a little structure on herself in continuing to use the program. And she’s cheerful and communicative while doing the computer-based work, as the picture above shows. She laughs at the humour in the word problems, she cracks her own jokes and even asks occasional questions that show she’s thinking creatively about what she’s learning.

The algebra is very easy for her, but her arithmetical skills are rusty through lack of use. For now she’s doing most of the practice problems — and not feeling frustrated by the review and remediation because she finds the format pleasant. I expect that as time goes on she’ll browse and graze and not work quite so systematically. I think the program will serve her just as well in that manner.

Noah and Sophie are very much looking forward to moving into Teaching Textbooks. They like Singapore Primary Math and it is serving them well (Noah is doing 6A, Sophie 4B). I expect even Sophie will be done with that program within the year, though, and it’s nice to have something that we all feel positive about waiting in the wings.