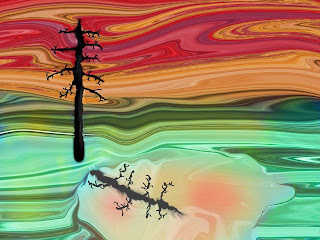 On Wednesday I got a warning from our ISP that we were on a curve to outstrip our data transfer limit by the end of our billing cycle. We pay a flat rate to 10 GB, and after that an extra $3 per Gig. We had used almost 90% of our allotted 10GB in the first 20 days of the month. I know the over-use comes mostly from Erin and Noah who are high bandwidth consumers. Since we have a wireless network and can run up to 5 computers on the ‘net at once (and sometimes do!), we can certainly rack up transfer. We had a quick discussion and decided that if we ran over, we should share the cost, docking allowance as required — but that an agreement on limits should prevent that necessity. No videos, no downloads, no music listening, and a maximum of an hour of on-line gaming a day were what we decided on. I printed out a graph and posted it on the fridge. Every morning we look up our transfer summary and log it on the graph. So far we’ve cut our daily use from almost 500 MB to around 100 MB and are on track to stay under our limit.

I must say I’m thrilled to have had some external factor force the kids to put some focus on how they’re using the computer, and how much. Computer use has dropped a lot, even when it comes to local (non-online) games. There’s a fair bit more social interaction and creativity showing up. More outdoor time and social time. On the 25th we enter a new billing cycle. I think I will print out another graph for next month and continue plotting our cumulative transfer through the billing cycle from time to time. It has been very instructive.

While Noah has continued to make a lot of use of the computer, much more of it has been creative, rather than simply game-playing. He has spent a lot of time working on Armadillo Run (a hard-drive-installed game / toolset) and his contructions have got a lot more complex. He’s building multiple interacting geared elevators, rocket-powered carousels and various things. There are also lots of Armadillo Run connections showing up. When he was outside tinkering with his bike, he looked at the spoke pattern and muttered “Ha! I want to try that on Armadillo Run! Bet it’ll be strong and light.” And whether coincidental or not, he got out the K’nex again this week and began, for the first time ever, inventing things rather than following construction diagrams. He built a solar-powered paddlewheel engine and in the process discovered gear ratios by attaching his ‘paddles’ to both the big and small wheels in his construction.

He also renewed his interest in computer graphics. He had begun to explore PaintShopPro, a Photoshop-like graphics program, last fall but lost interest as Runescape and such took over his mind. But late this week, after the ISP warning, he began to really delve in. The image above was inspired by a book about the Group of Seven and their paintings that we got at Christmas.

In addition, he’s reading voraciously and practicing viola more thoroughly, and feeling better about himself in these areas of his life.