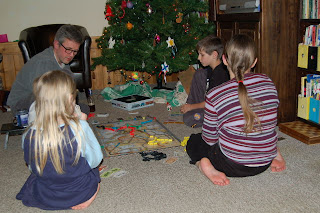 The plan was to have a family games night every week, though we haven’t quite managed that. Maybe every second week. But I guess that makes it an even more special treat when we have a few days in a row to play intensively. Our Christmas Eve tradition is now that we open, and play, a new game. This year’s game was Ticket to Ride Europe which you see the crew playing in the photo. We really enjoy the simplicity and length of play (60 – 90 minutes), which is somewhat shorter than our other favourite game Settlers of Catan.

We tend to play in non-competitive ways, or at least de-emphasizing the competitive element, because games involving people from age 3 to adult aren’t exactly an even playing field for cut-throat play. Often this means not keeping score, playing with open hands, playing as a team, charitable trading and so on. While we all like to know the rules, we freely disregard those that increase competitiveness and decrease (for us) the enjoyment of the play.

We avoided competitive games for many years, sticking with Family Pasttimes games like The Secret Door or Harvest Time. Noah especially dislikes competitive environments intensely. But gradually we realized that we could play more conventional games if the object was fun rather than a win. Winning is always beside the point when we play.

We have a few other games we really enjoy, besides those I’ve mentioned and the obvious chess, crazy 8’s and the like. Carcassonne, a medieval tile-laying game is fun, even just for making maps — but also a good strategy game. Things… was a major hit last Christmas. Each player writes a response to a card like “things you shouldn’t do at a funeral” or “things kids do better than adults”, and the object of the game is to guess whose answer is whose when they’re read aloud by a Reader. We always end up laughing very hard. Blokus doesn’t get played as often as the others but is quick and fun.

We recently got Cranium which has been fun a few times but I don’t think it will last. We’ve probably been through almost all of the cards, and it will get stale when we hit repeats.

Our favourite card game by far is Set Game. We take this with us everywhere. Sophie got the knack of this at age 5 and expect Fiona will be getting it pretty soon. It’s one of those visual perception and pattern-recognition games that some people find much easier than others, and often it’s children who triumph over adults.

A truly magical game we were given a few years ago by my UK-based brother and sister-in-law isWaldschattenspeil (Shadows in the Woods). It’s played in the dark, with a tealight candle being the main gamepiece. Wooden trees cast shadows. Little gnomes lurk in the shadows as the candle moves around the board trying to find them. I can’t recommend this game highly enough for its ability to cast a spell over a family huddled at the kitchen table.