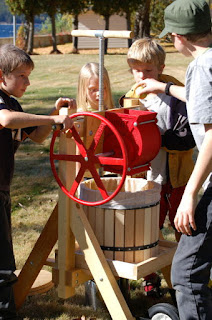 The GRUBS held their 2nd annual Harvest Festival last weekend. It was a chance to celebrate another successful growing year, to have a feast, to have fun together and to thank the community at large for its support. We churned butter, made herbed garlic butter which we slathered on French bread and warmed beside the bonfire, we prepared a massive harvest soup, we laid out samples of our sweet and dill pickles, our sundried tomatoes and dried prune-plums, our fresh tomatoes and fresh carrots and beans. We made herb tea. We demonstrated our new fruit press by producing a yummy pear/apple/grape juice that everyone tried. And we gave tours of the garden which now sports the foundation of a nature plantscape marsh garden (the digging, lining and backfilling are complete). The weather was beautiful.

That’s me in the front with the turquoise butterfly shirt on. Fiona is standing on my right in the stripey pink getup. Noah is in the “22” shirt behind us. Sophie is two to Noah’s right in the light green shirt. Erin is back row left in the navy, with the willow-and-flowers crown. 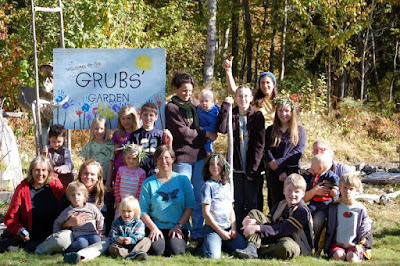 Good fun! It’s been a pretty good GRUBS year. We were disappointed that it turned out to be a terrible year for fruit and so our fruit press has been of limited use. Bears by the dozen turned up in our little town of 600 by the end of July because there were no huckleberries up in the alpine areas for whatever reason, and because reproductive rates over the last 2 or 3 years seem to have been higher than normal. Seven bears were shot by wildlife officers in early September, but the fruit was pretty much picked clean of the trees in July and August, long long before it was ripe and ready for the press. Normally the bears show up in late September and timely harvesting is (excuse the pun) fruitful. This year was weird. So the press has only been used 6 times, three times by us and three by other community members. Ah well, it’s sure to get more use in future years.