Today was a typical GRUBS meeting and I thought I’d write a little about how the sessions operate, since we’ve kind of evolved into an approach that works.

Donna (the other main organizer) and I both had things to bring and pick up on the way to the meeting. I stopped with the kids to pick up the first garbage can of donated compost from a lovely older lady who’s moving later this month. We had to do some problem-solving to heave the garbage can, now weighing well over 100 lbs., into the van. Some 2×4’s as a ramp did the trick. 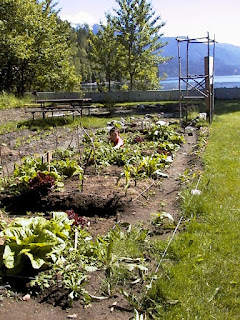 We arrived at the garden at 10 am and for a while we were the only family there. I started working on adding mounting cross-pieces to the bat-house pole with the power drill, some 2×4 bits and some lag bolts. My kids drifted off the to the lakeshore. Noah had brought his rockhounding ‘kit’ (some equipment he’s cobbled together himself) and so he began chipping away at rocks on the beach. Free play on the beach is wonderful, but we’ve decided to ban it during actual GRUBS meetings since we can’t properly supervise the non-swimmers there and we can easily lose all the momentum of the meeting. So it’s fair game to play there before and after, but not during meetings.

Finally the other families began to arrive. When we had what seemed to be a quorum, we summoned the beach-dwellers with the ‘gong’ (two pieces of scrap metal found on the beach). First we looked at the difference in growth in the veggies in the heavily-manured areas vs. the untreated beds. There was up to a five-fold difference in growth. We discussed the soil macronutrients and what was likely missing from the untreated soil and what we ought to do to improve the soil. Our solutions: side-dressing previously planted untreated beds with compost, and planting fallow areas with a green manure cover crop. We had about 7 jobs to get done, besides the standard weeding and watering of the kids’ own individual garden plots, so I wrote them on the white board and we picked three to start with. We split into three groups. One weeded the corn ‘field’, one unloaded the compost and one cultivated and then planted alfalfa as a cover crop on a hitherto fallow area. Then we switched to the next three jobs on the list: levelling and mulching a new raised bed to encourage composting of the turned-over sod it’s been made from, weeding the herb garden and starting work on the worm bin. I took two 6yo boys to the adjacent hospital for shredded paper for the worm bin; as there was little in the bag, we had the thrilling (to them) job of running a few hundred sheets of recyclables through the shredder.

Someone had brought a watermelon and was sharing slices out. D__, another GRUB, arrived, fresh from a family reunion weekend with three of her cousins. Her little plot had been growing like crazy while she was away last week, so we all had fun looking at the size of her peas and radishes and showing her cousins around. The kids got busy weeding and watering their individual plots. And the final job was a big cherry picking party. A number of nearby feral cherry trees were laden with fruit, so the kids picked and ate and we ended up with a couple of litres of surplus cherries to take home and throw in the freezer to be made into ice cream topping for this fall’s Harvest Festival.

We noticed that the transplanted plum tree that we thought was completely dead had sprouted some lovely new green leaves around its trunk. There was general wonder and rejoicing.

Then we had a final circle time. The GRUBS had been invited to go on a garden tour this evening with the local adult-oriented garden society, so we discussed etiquette and appropriate behaviour for anyone who decided to come. We talked about plans for next week (solar oven cookies, a talk and demonstration from a local vermicomposting expert, and possibly raising the bat-house pole) and asked the kids if they had any other activity ideas for GRUBS. Noah mentioned his idea for a “museum,” which is I think what in a classroom might be called a “nature table.” He wants a place to display interesting specimens found around the site … rocks, bones, shells, etc.. There seemed to be a lot of enthusiasm for this idea so we agreed to pursue it further in the weeks to come. The kids were encouraged to harvest their Romaine lettuce this week and take it home for big salads.

We cleared the white board and wrote down the date and time of our next meeting, leaving a space for anyone who shows up later this week to water or weed to mark down their visit. And then we packed up the tools we’d brought, put away the buckets and garden cart and other tools and headed home for lunch.

With D__’s cousins we had about 23 people there this morning. Normal total is about 18 or 19. It’s a wonderful group of curious, respectful, motivated kids. It doesn’t always seem like we’ve accomplished much (though today did feel productive) but I look at the garden and think about all the activities we’ve done and I realize it’s all really adding up. There’s a wealth of experience accumulating amongst those attending, and the garden is gradually transforming from a wasteland of rocks & roots into a vibrant, vital place.

This afternoon I did some more teacup birdfeeder glueing with Sophie. We’re making a couple of dozen of these things to sell as GRUBS fundraisers. We epoxy a thrift shop cup to its matching saucer, then glue on an inexpensive stainless steel spoon. Once that’s dry we turn the thing upside down and glue a copper pipe end cap onto the bottom. Then we cut a length of copper pipe, push it into the ground and friction-fit the teacup onto the top. The teacups will be labelled with instructions and some info about GRUBS and filled with a starter-baggie of wild bird seed. They look very sweet in amongst perennials in the garden. The spoon acts as a perch. I hope they’ll sell quickly at the local outdoor market. They’ll increase the club’s visibility in the community too I think.

This evening we went on the garden tour. The local landscaper, who had created the garden, and who is president of the garden society, led us around. The place was amazing — it had all been carved out of the forest within the last year. The boulders used to define the raised beds and retain soil on slopes were apparently about 50 truckloads worth (at $400/load, we were told) and that obviously wasn’t where most of the money had gone either. This residential garden was estimated by those in the know to have cost somewhere around $80 – 100,000. There were two large natural-looking deep ponds fed by a waterfall forming almost a moat at the front of the house and expansive views of the lake and the wilderness park of mountain peaks on the far side. The property is off the electrical grid, but they have built their own power plant on the creek and don’t seem to want for wattage. Quite the experience visiting it. The kids were wonderfully behaved and enjoyed themselves a lot.