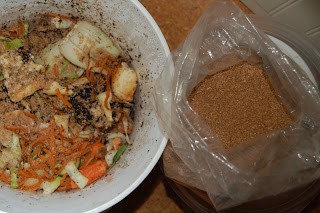 Last fall we started using a bokashi waste system. All food waste, including meat, bones, dairy and small amounts of oil and fat, went into a plastic 5-gallon bucket with a lid, combined with sprinkles of a microbial starter. We used a potato masher to pack down the waste as it accumulated, creating a fairly anaerobic environment. Once a bucket was packed full, we sealed it off from ambient oxygen and left it for at least a couple of weeks and started a new bucket.

After 2-4 weeks, the bokashi fermentation would be complete, Todd the Bokashi Guy told us. We took him at his word, but having seen the stuff coming out of the community bins at last fall’s Harvest Festival it was hard to believe that much had actually happened. The food looked almost the same as when it had gone into the bucket. It smelled worse, to be sure — a combination of vinegar and vomit, maybe? — but the colour and structure was pretty much preserved.

Really, Todd? I thought. Well, let’s work on the assumption that you’re right. We’ll assume that some sort of invisible process has occurred, and this stuff is really mostly digested like you say, appearances to the contrary. If you’re right it’ll turn into fully finished compost in days rather than weeks once we get it into the garden.

So all winter we fermented our food waste. When all three buckets filled we emptied the oldest of them in the compost area beside the garden to await spring. We piled on some dried leaves, and hoped beyond hope that once the pile warmed up in the spring we wouldn’t end up with a party of bears and cougars feasting off a massive yummy pile of table-scrap soup.

And so now the weather is warm. And the verdict? 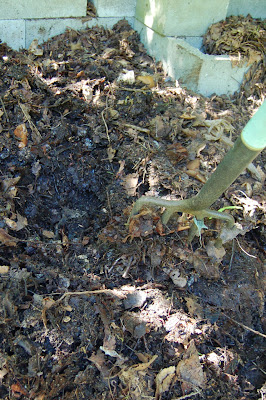 Today I took the fork out and probed through the heap which has received a total of about forty gallons of food waste over the past seven months. The two most recent five-gallon additions to this pile were 4 weeks ago and 3 days (yes, days!) ago. I haven’t done much mixing other than piling on some leaves, so I expected to see Monday’s food sitting right below the top layer of leaves in all its colourful slimy glory. But no: there is an occasional recognizable bit of citrus fruit rind from the most recent addition, but other than that the pile is black gold.

And … this has been our best spring in recent memory when it comes to bears. As far as I know we haven’t had a single ursine creature lingering on our property. The dog agrees.

So yeah, bokashi for the win, I say!