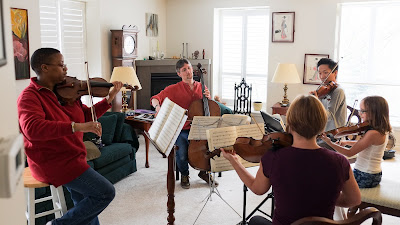 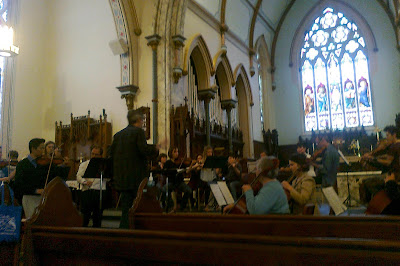 This year was the 40th anniversary of the Suzuki program I grew up in. The program back “home,” in Ontario, a place I left in 1981, where none of us lived for a while but where my sister and my mom now live again. A few months ago I had been warned that I was expected to attend the celebration at the end of April. As one who tends not to do a good job of maintaining old relationships, I tend to balk at the prospect of school and college reunions. I live more in the here and now. I’m not much of one for nostalgia. But this was different. I wanted to go.

My brothers were both coming. So were the kids who were part of the chamber group I grew up with. Unlike my friends in high school, my relationships with these kids had been an authentic part of who I was then … a part that had stayed with me even through the years of no contact. Now we were all pushing 50. Wow.

Erin was still in exams in Montreal. Noah and Sophie were off on tour with their choir during the week that overlapped with the beginning of the anniversary celebration. So Fiona and I decided to go just the two of us, leaving Chuck to work and to be the parent after Sophie and Noah returned. We would attend the gala weekend, then drive up to Montreal after Erin’s last exam was over and use our rental vehicle to help Erin move from the “mansion” where she’s lived the past two years to a tiny bachelor apartment in the student ghetto. And then the three of us would fly home together.

The weekend was amazing, from the family time with siblings and raucous restaurant meals to the gala catered dinner, the alumni performance I was part of to the final performance that involved alumni, alumni offspring (i.e. Fiona) and all current students playing together at the big new (to me) performing arts centre.

Afterwards there was more family time, and we spent time at my mom’s jamming with some string quartets. Fiona even got to play along for a movement with the big people.
And then — what were we thinking?! — we drove through Toronto and all the way out past Ottawa to Montreal. We cleaned the heck out of Erin’s old place, packed her stuff, drove through traffic-and-construction-clogged downtown Montreal back and forth and back and forth and back and forth with our little compact car, delivering boxes and piles of things. And cleaned more, and slept on the floor, again. And cleaned more and drove more through downtown. And then bashed our way back through rush hours in Canada’s two largest cities once more a day and a half after driving east. We escaped without any real mishaps and miraculously no parking tickets.
We arrived home very tired, two of us with crashing head colds, but delighted to have been able to attend. Reconnecting with family and friends was amazing. Fiona was a wonderful travelling companion; she put up with everything happily and loved meeting everyone, whether she knew who they were or not. And it was lovely to see where Erin is ensconced in Montreal.
40th Anniversary SSSG Trip