I’ve been somewhere tropical twice, both times to Baja California. Once by VW bus, once, in an extravagance borne of at deep Northern Ontario winter, by plane. The last time was 22 years ago. Our last attempt at a real family holiday away, in 2008, was an abject failure. So we were excited but also rather cautious about the prospects for a true mid-winter tropical holiday. When Noah broke his foot a week before we left, we hoped that was it for misfortune this time around. As it turned out, this was the case.

We got on our flight without incident. Noah’s crutches earned him early boarding, which was a nice bonus! We had a breath of tropical air in Maui before skipping over to the Big Island on a short flight.

We had rented a house about 40 minutes south of Kona in a rural neighbourhood overlooking the Pacific. The house turned out to be perfect: spacious but not grandiose, nicely appointed but without the sort of opulence that would have made us nervous. It had two bedrooms plus a loft with a bed, two bathrooms, a nice open living area and a lovely lanai (deck) running all the way around. There were lovely neon green geckos that inhabited the exterior of the house and the railings.

From the deck we could practically touch the papayas and coconuts hanging from trees. There were baby pineapples and avocados on the property as well. Another popular fruit tree was the noni — but purely for ornamental reasons, as its fruit is known colloquially as the vomit fruit or starvation fruit, as our noses attested upon close inspection.

The neighbours’ roosters, some wild turkeys, yellow-billed cardinals and mourning doves filled  the air with lovely sounds, and at quiet times we could hear the waves crashing on the beach below. “Below” meant 2 kilometres along a winding road which led relentlessly and precipitously down to a lonely pebble beach; grades were as high as 22%. It’s amazing what is possible with road-building when there is no possibility of snow!

We ate at home, mostly, but also did occasional lunches at various small restaurants along the highway between where we were staying and whatever was the snorkelling or sight-seeing destination of the day. We had about a week in Hawai’i and filled it with a fair bit of chill-time at the house, day trips here and there, and a fair bit of snorkelling. 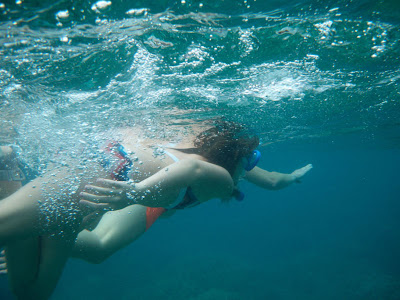 We took a day at Hawai’i Volcanos National Park. Noah was able to do a couple of short hikes with us: one through a lava tube and another into part of the caldera featuring sulfur crystals and steam vents. We headed to Hilo for dinner and then returned to Kilauea after sunset to see the fiery glow of the crater lighting up the steam and smoke above. Volcanic activity here isn’t nearly as impressive as it was 10 years ago, when lava was pouring across roads and into the ocean on a daily basis, but there it is still in evidence throughout the park. Fiona is now busy putting together a science fair project about lava (“The Effect of Agitation During Cooling on Crystal Formation”). 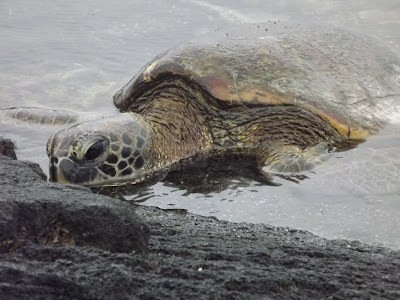 The kids definitely enjoyed snorkelling, and the reefs were amazing. Fiona was the most obsessed, spending as much time in the water as she could. The first day presented a bit of a learning curve: fitting one’s mask, learning to clear a snorkel, putting fins on at the right moment, and managing to get into the water from rocks with waves breaking across them. The surf was low (relatively speaking) during our visit, but for people who rarely deal with waves of more than a few inches on their home lake, even 1-metre swells were intimidating when they were bashing across rocks and fish and other unknown marine obstacles.

But when that undersea world opened up, with its incredible variety of friendly, brightly-coloured fish, the tide, so to speak, turned. The first day was fun but challenging. By Day 2, it was nothing but fun. We saw an amazing variety of boxfish, tangs, surgeonfish, iridescent parrotfish, butterfly fish, trumpetfish and moorish idols. We had bought a little aqua-pac so that we could use a point-and-shoot camera underwater. Unfortunately the bright light of the water reflections prevented us from being able to see anything much in the LED view screen so photos were shot pretty much blindly. I had been madly entering GoPro Camera sweepstakes for a month before, but had failed to come up a winner. Here’s the video we could have shot at the beach we visited the last two day if we’d had one.

The weather was lovely. Overcast for at least part of most days, and downright rainy for an occasional morning, about 75 degrees on average, yet with enough sun to risk burns if we weren’t careful. I managed to run a couple of times without dying in the heat. We spent time at the pebble beach playing in the surf. We got creative weaving palm leaves. We encouraged geckos to wander up our arms. We floated on the ocean at sunset. Noah discovered that if he could get past the crashing waves safely, once floating his foot was quite happy in the ocean. 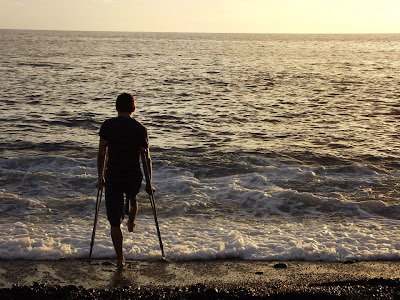 We made a stop one day at Pu’uhonua O Honaunau, the Place of Refuge. There we saw sea turtles, native carvings and structures, artisans at work and a pretty cool outrigger canoe in the process of restoration. We liked the market in Captain Cook, where we were able to stock up on mangoes, salsa and lilikoi butter. The latter was first discovered in a leftover jar in the fridge of our rental house. It’s a glossy bright yellow butter the consistency of smooth peanut butter, made from passion fruit (lilikoi). We came home with one precious 250 ml jar of the stuff. If I ever find passion fruit on sale by the case-lot in Canada, I will certainly be making my own lilikoi butter! 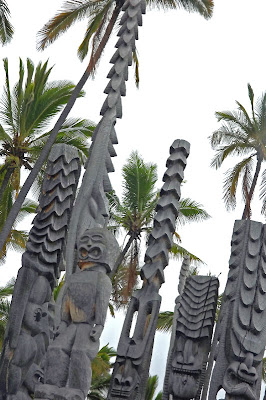 And we kept watching Downton Abbey, a nightly ritual of two episodes, finishing season 3 the night before we left.

The trip home was uneventful. Noah was able to walk on his cast by this point, so we checked his crutches and boarded flights with the masses rather than with the infants and the disabled. We took a different route, stopping at a border town with a “shipping services” business. We had had delivered there a bunch of things that don’t ship affordably to Canada, including a big clothes order for Noah which he was thrilled about, and binoculars for Chuck. And more practical things like a replacement motor for the fan in our range hood.

We picked up the dog on the way home. She had been having a holiday of her own, staying in a home-stay type situation down the valley. She’d had some troubles playing nicely with others, as she isn’t terribly well socialized to other dogs but seemed happy and healthy. The cat had been subsisting on occasional visits from a friend at home, and was in raptures to see that we had returned. The weather was kind when we returned: we had a couple of days of real spring-like weather and sunshine before we headed back into cooler temperatures and eventually more snow.

2 thoughts on “Spring Break in Hawai’i”