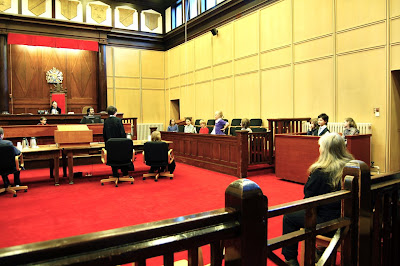 Our workshops exploring aspects of law and government have continued since last spring and concluded this week with a moot court. We’ve made a special trip to Nelson for each one, and even though we do far too much driving at the best of times, it’s been worth it.

Our Lawyer Mentor has employed an consistent and unique theatrical style which the kids have played along with happily. He reads a narration of the events of our fictional country aloud. As he does so he non-verbally appoints certain kids to certain roles. “The head of security …. [grabbing a police hat and dropping it on the head of a likely-looking 9-year-old, then gesturing for her to come onto the rug which is serving as the centre of the theatre space] …. went to the king [she walks to where the king is standing] and said ‘I will make sure your laws are followed!’ [nodding for her to repeat this line, which she does],” And so on, with the story evolving at each session.

Here’s how the story of our country has evolved:

While it was nice to be able to do what you wanted, some rules were needed to help keep order. A lady  decided she would make rules to control the chaos and she came to be called Queen Henrietta. She made laws about not riding horses through carrot gardens, and about not singing all night when people wanted to sleep. But she also made laws that said the people had to give her presents all the time. She became very powerful and rich, and the people, who disagreed with some of her laws, were not very happy.

Her evil nephew Prince Henry saw that the people were unhappy. He saw that the Queen was very rich. He decided that with the help of some of the people he could get rid of Queen Henrietta. And so he did. He told the people that he would help them be in charge of their own country, so they agreed to sneak into Queen Henrietta’s castle at night very quietly and then suddenly yell “Boo!” This frightened her so badly that she ran away. Now Prince Henry told the people that they could vote to choose someone to make all the laws. But he got his friends to give all the people O’Henry candy bars so that they would vote for him. Once he was elected, he began to make laws to keep himself in power.

The new laws meant that the people had very little freedom. If they disagreed with Henry they were arrested by his security force. There were no parties allowed, no singing, not even any talking a lot of the time.

Finally the little people sneaked up on Henry and scared him away with a big “Boo!”

They chose a nice guy to be the head of the country and called him King Fair. King Fair agreed to make only the laws that the House of Laws told him to make. The House of Laws was made up of one person chosen from each family. They talked together and then decided what laws King Fair would pass. “So it shall be passed,” King Fair replied every time the people from the House of Laws told him about a new law they wanted. If it seemed like laws were broken, the police would arrest people. The court would listen to evidence and decide if they were guilty or innocent.

But rumours began surfacing that the Evil Lord Voldesnort was planning to take the country over with the help of collaborators. So the government took the unusual step of making a far-reaching security law. Among other things the Security Act mandated the installation of wireless video surveillance cameras in every living room in the kingdom. The Brown Family refused to allow the camera to be installed. They were arrested and charges brought against them. 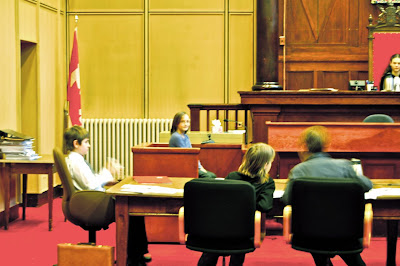 And so we ended up in a provincial supreme courtroom last Friday. In all honesty the defence lawyers didn’t do nearly as good a job as the prosecution. While the unconstitutionality of the security act was clear-cut in most people’s minds, the defence didn’t do a great job of demonstrating this in court. But in the end the judge found for the accused and the Browns were set free.

Fiona had the role of a witness for the defence. She was Miss Matters, an expert on the health and safety issues pertaining to microwave radiation. She read a prepared statement and was examined by counsel for the defence and then cross-examined by the prosecution. She wore and then presented to the bench Exhibit C, a tinfoil hat used by those concerned about the health effect of microwaves.

I’m so thrilled that we’ve had this opportunity. It has spawned some amazing discussions afterwards as well. It has been the nidus of broad, far-reaching exploration of the philosophy and practice of law and government.