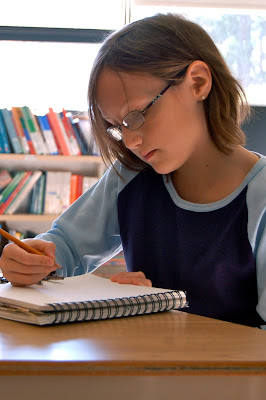 One of the things I love about homeschooling is the way the boundaries between subjects don’t need to exist at all. I know that many schools pride themselves on making “cross-curricular connections,” but those are more like threads connecting otherwise discrete areas. As homeschoolers we are free to dwell for months in the spaces between the subjects.

This fall has been a case in point for Fiona. She’s been learning about … how does one describe it when it isn’t a traditional subject area? … learning about where math, art and nature overlap.

I think perhaps the thread of discovery that led us into this playground was the stylized form of doodling called zentangles. This was clearly a form of creative precision that appealed to Fiona: the fine lines, the iterations, the patterns and conventions, the interesting figure-ground relationships.

And then, suddenly there was Vi Hart and her quirky doodling in (and about!) math class. Fiona has spent hours watching these videos over and over, experimenting with the tricks and techniques. Hexaflexagons, binary trees, Fibonacci spirals, doodling music, she’s loved all of Hart’s stuff. 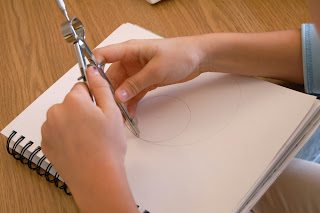 And that brought us to October, when art class began. Last year’s classes focused on the alphabet and on place: our community, the natural world we treasure, and letters, and words, and art that combined them all. But this year’s series of workshops, wonder of wonders, is about geometric patterns in nature and art. 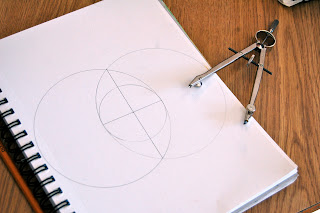 How perfect for this girl at this moment in her life! 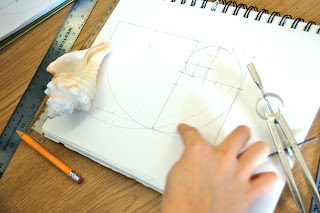 As with most homeschoolers’ classes, this one is multi-age and multi-level. The instructor is amazing at meeting the needs of barely-5-year-olds, and even some of their younger siblings, as well as challenging the 9- to 11-year-olds.

Fiona is neat to watch socially in the class. She enjoys talking to the adults — she chats away with the art teacher and the homeschool liaison teacher genuinely and comfortably as if they are good friends, and they afford her the same respect and warmth. She and the 11-year-old are at similar academic levels and are friends from way back so they banter back and forth about science, spelling, vocabulary, music, books and math. She enjoys the company of one lovely girl who is almost exactly her age; they often hang out after class for an afternoon. But her favourite classmate to spend time with is a 6-year-old. And it’s not a doting babysitter-like arrangement. She doesn’t play with this kid because she thinks she’s cute or because she enjoys being a leader who is bigger and older and more capable. She plays with her simply because they’re really good friends. She really really likes J. as a person. 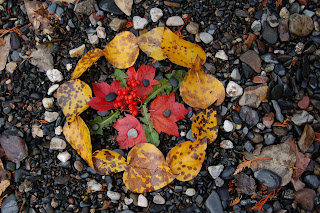 Art class is outdoors sometimes too. We walk to and from the lakeshore, or along the creek, or along the streets of the quiet neighbourhoods near the school. The kids enjoy the less structured time, the physical outlet of getting themselves somewhere on their own two feet and the chance to socialize. Along the way they’re learning to see the patterns in nature, collecting specimens and samples, building ephemeral art.

I love ephemeral art. We have a friend living nearby who makes a living at sand and snow sculpture. I admit to at first thinking it was kind of gimmicky, a sort of festival competition endeavour designed to pull in tourists and make a spectacle. But I see it differently now that I’ve watched his work evolve, and seen Andy Goldsworthy’s work, and grown older and more comfortable with impermanence myself. For kids, I think ephemeral art lowers the stakes: there’s no need to strive for perfection if you know it will wither or blow away. Just enjoy the process, and appreciate your work for as long as it lasts, and that’s all. What wonderful therapy for perfectionists! 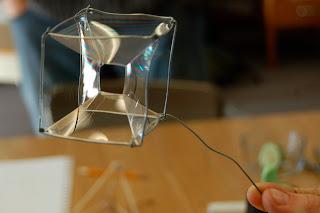 I was mystified a year or so ago when Fiona announced that architecture is something she could see herself doing as a career. Mystified because she had never expressed much interest in building toys like Lego or Knex. Mystified because she had never been rapt over cranes or framing or cement trucks as I assumed budding little architects would be. But she loves the design aspect of architecture, especially spare, clean contemporary architecture. She doesn’t see many clean modern lines in our little hewn-log corner of the world, but she loves images of the sexy towers in Dubai, and of achingly spare glass-and-rice-paper rooms in Kyoto apartments.

Further, she has fallen in love with contemporary design. An IKEA catalogue was her gateway drug. Now she’s browsing design blogs and awards. Who knows where it will all go. At this point I’m avoiding labelling and categorizing her interests as much as I can. Although a certain amount of labelling is helpful to her in finding resources and talking about her interests, I think it is wonderful the way she is comfortable inhabiting the overlapping space shared between various subjects.

One thought on “Between the subjects”