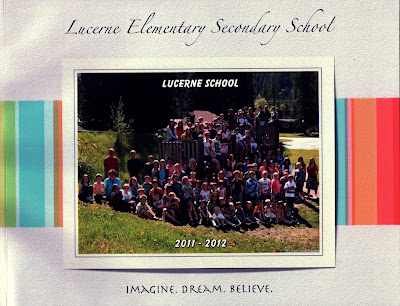 Sophie and Noah both entered high school this year out of a lifetime of unschooling, Sophie full-time in a combination of Grade 8 & 9 (Grade 8 being considered high school here) and Noah part-time in Grade 10. I realize I’ve written almost nothing about their experiences there. All in all I think it’s been a successful year that has given them both a lot of what they wanted. It was hard to know: Noah in particular isn’t very forthcoming, and then there was the fact that the teachers were engaged in job action all year long and we didn’t receive any report cards until school had wrapped up at the end of June. I was pretty sure it was all going fine, but it was hard to really know.

Both kids went to school without complaint, even after the novelty had long worn off. I left 99% of the organization and responsibility up to them. I think I asked each of them maybe once or twice over the course of the year whether they had homework or assignments they should be working on but that was the extent of my parental management. While I sometimes wondered whether Noah had any kind of handle on due dates and exams, he seemed to blunder through without problems. He still doesn’t much enjoy tests and exams, but the kid who would burst into tears over his first wrong answer in a note-naming quiz at his piano lesson when he was 8 seems at age 15 to handle timed tests without too much stress. Sophie took to the whole organizational challenge with glee. While she had a little trepidation going into her first set of exams, she discovered she loved the challenge and ended up looking forward to her subsequent exams. It was wonderful for me to see that they handled the transition with little active parental involvement.

That’s not to say that I have felt detached or have wanted to remain aloof from their school learning. I love our local school. I know most of the teachers at a personal level. I have no end of respect for what they do and I love the flexibility and innovation they exercise. I very much wanted my kids to be happy and successful there. It’s just that I felt that part of the reason they were attending was out of a desire to become more independent people with more responsibility and lives separate from home and family. It seemed to make sense to give them that at this point of transition and trust that they would handle it well unless it was proven otherwise. I also figured that my confidence in their ability to make a successful transition might become a self-fulfilling prophecy, that they’d rise to my expectations.

Sophie likes getting good marks. She has a certain awareness of what the achievement benchmarks are and keeps track in a fairly normal way of how she’s been scoring on tests. But she doesn’t seem to let the marks take on more importance than the learning. She’s pleased when she does well on a test, and remembers the grade, but she’s not going to school and studying in order to get good grades. She’s there to learn. It’s just nice when the two coincide.

Noah seems fairly unaware of the whole business of marks. He too is pleasantly surprised when he gets good grades, but he’s the sort of guy who doesn’t wonder about or ask about end-of-year report cards. He doesn’t seem curious about how he’s scored or to compare himself to his peers. Marks are sort of a beside-the-point form of validation to him, I think. Sometimes they’re a decent indicator of mastery of learning, but they’re not as accurate an indicator as his own assessment.

Anyway, they both ended up with excellent grades.

Socially it’s been mostly good. Both kids have lots of friends and seem to be viewed as interesting, easy-going and friendly. There have been a few poor choices made here and there about this and that. There’s been a bit of para-romantic drama, particularly amongst the Grade 8/9 girls. Noah, whose grade-level “class” consists of one other student, has ended up being kind of a mentor and social magnet for a bunch of slightly younger kids. That puts him in the same social circles as Sophie and thankfully they both seem totally cool with that. They’ve both got involved in the local Youth Centre, Sophie being on the Board of Directors, and Noah continues to do some volunteering with the community Gaming Club.

Their relationships with the teaching staff have been wonderfully positive. The teachers seem to really, really like them. One of the things I love about the school is how authentic the teachers are: they’re real people, with passions and hobbies and lives outside of work, and they share these with their students. In a tiny town like this teachers have two choices: they can create an artificial separation between their teaching persona and their real lives, or they can meld the two. When their daily lives are as visible to their students as they are in a village of 600, the former seems oddly dishonest. You are who you are, whether at the coffee shop with your mountain-biking friends, or in the classroom. To pretend otherwise seems as bizarre as it would be to ask my kids to call me by a teacher name, and not “mommy” when I’m instructing them at home.

So it seems to me as if the teachers are not just teachers, but mentors, to my kids. They share a lot of who they are, their interests, their values, their politics, their passions, and so my kids see them as real, whole people, not simply as authority figures and dispensers of education.

Corazon worked beautifully. Both Noah and Sophie were involved and that meant that there was a student from each of Grades 8, 9, 10 and 11 from the local school going down for rehearsals every Tuesday afternoon during fifth block. The school supported this (and the week-long Cuba trip for the older two) and the carpooling worked out well.

The most significant down-side has been the way their string-playing has got pushed to the back-burner. With Noah there was the added complication of him not having a local teacher. Without Erin causing us to be in Calgary every month to serve her hunger for lessons, there was no natural way for us to get Noah a teacher. His SVI-fired enthusiasm for the viola gradually petered out last fall. He continued with his ensemble-playing, and did a couple of Symphony gigs with me. But regular practicing and solo repertoire work came to a standstill. Sophie, the full-time school student, brimming with enthusiasm for all this nifty new structured learning which was coming so easily to her and earning her such approval, found violin to be a pretty poor cousin. She quit private lessons before Christmas, continuing in the chamber trio but doing a minimum of work. However, she is back taking occasional lessons now, so she hasn’t totally given it up. Both kids are registered for SVI in a couple of weeks and are looking forward to it.

The other major issue has been the amount of driving I’ve had to do. Chuck’s drive to work (past the school on the way) is often somewhat discretionary in its timing, but he didn’t tend to work around the kids’ schedules, so I did almost all the driving. That meant an average of three or more trips to the school per day. It’s not far: it takes about 12 minutes per trip. But all those little bites out of my day, and all the gas out of my minivan … it got tiresome. If they didn’t have 10 pounds of textbooks, and 5 pounds of computer, and a no-shoulder winding mountain highway to travel, if there was a schoolbus or public transit, if the road wasn’t so steep, if it was only a mile, if there was another family out this way, I wouldn’t have to drive all the time. If Noah is willing to get his Learner’s Permit when he turns 16, it’s possible that if he passes his test a year later I might get out of some of the driving during his last few months of school. If Fiona and I can do without a vehicle all day.

Which begs the question … will they continue in school? Yes, that’s the plan at this point. Noah will go full-time next year. He found this year that even for his home-based learning he was more efficient taking a lot of it to school and doing it there. It just seems simpler to do it all under the school’s umbrella next year: they’re very flexible. Sophie has some reservations about next year’s class mix. She has enjoyed working at a higher level, has liked being part of classes covering Grades 8-10 or 8-12, and could definitely handle even more challenge than she got this year in her Grade 9 courses. Next year she may end up in the top grade of some three-grade splits (7/8/9). She’s not particularly optimistic about the social and educational milieu that will give her, but is reserving judgment for now.

End of the school year