If ever ever wondered whether we were doing the right thing sending Erin off to live on her own in a big faraway city while still a high schooler, her experience at NYO is providing some resounding reassurance. Last summer, before she moved away, she participated in Canada’s National Youth Orchestra. She did well. She worked hard. She enjoyed the thrill of playing in such a high level ensemble. It was like discovering a secret world where people were as weird about music as she was. She had found her tribe! It was a heady experience. All these other music students, and not only had they been putting as much passion into their music as she had, they were in home environments where they were getting similarly intensive nurturing of their abilities. She had the sense, I think, of being swept up in a wonderful, exciting river of activity that felt like the right place for her, but gosh, it was flowing fast and strong, and so many of the other people around her seemed to have been swimming in similar rivers for years. 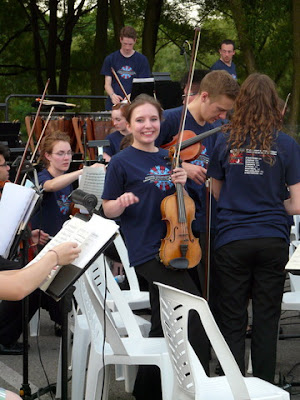 This summer she’s back at NYO and she’s in such a totally different place musically. She’s completely comfortable with her abilities, she knows the gig, she arrived primed to dive fully and completely into the specialized experience it offers, she is getting so much positive feedback about her progress. The coaches who know her from last year are very impressed by the transformation. “I’ve been taking lessons,” she said. “Yes, that helps” was the amused response. At least some of them were aware of her geographic challenges in the past. Actually, one of them had offered her a free lesson in the public school auditorium of a neighbouring village during a cold and desolate February supper-hour 18 months ago when his chamber ensemble was here on tour. So yes, he understood where she lived.

While last year she held her own in the depths of the violin section, this year she’s been placed right up front of the first violins for the majority of the major works: concertmaster, second or third chair. Amazing what getting appropriate private teaching on a weekly basis will do for a motivated kid who hasn’t had that opportunity for years.

And she’s feeling completely in her element. But the mono-diet of orchestral rehearsals, while stimulating, is beginning to leave her hungry for other stuff. She can’t wait to have more time to practice, to try out some composition ideas, to get lessons with her teacher, to dive into music academics like theory and history, to work on excerpts for her ensemble placement audition at McGill.

The down-side: she needs a new instrument, having musically far outgrown the violin she’s had since she was 13. It was fine back when she was learning the Monti Csardas. For a kid who will be knocking back Tchaikovsky and Paganini this fall it’s not nearly enough. Oh well, it’s not like we needed a new minivan, not really.