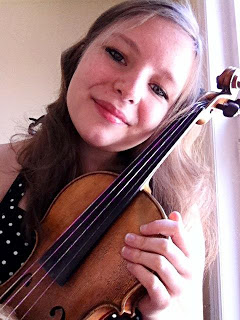 We have Erin home for almost four days. She made the trip back from Montreal for her high school graduation weekend. While she’s been living there this year studying violin and playing in an orchestra, she’s officially still been a student within our local school district, earning credit towards her graduation diploma through independent study in a variety of formats.

Even in her earlier high school years she had been enrolled technically full-time but granted credit for a lot of her home-based learning, working at the school part-time mostly in the independent study program, and doing an occasional in-the-classroom credit. So she didn’t feel a strong sense of connection and loyalty to her fellow graduates, but with scholarship and bursary awards influencing the decision we decided it was the right thing to have her return and participate in the hoopla.

The trip back has been short, because she’s got her last violin lesson of the year and her last orchestra concert in the next week. She’ll write two of her three final exams at the school tomorrow, and then we’ll make the four-hour drive to our airport of choice to get her on the plane.

I grew up in what would have been called a small city, but which in my current rural environment would be considered quite large indeed, and my high school graduating class was about 400 in number. Graduation was a minor event. I don’t honestly recall whether I participated or not. I think I have a vague memory of crossing the stage at school to receive something, but it may be that I’m recalling some other awards assembly.

Well, things are rather different where we live now. Erin’s grad class is seven in number. It’s possible that only three of them may ever take another academic course in their lives. For this community and for the grad class itself, the completion of high school is a momentous event. The grads have been planning and fund-raising all year. Families may spend several hundred dollars on dresses and accoutrements. Extended family arrive from far and wide. Grad gifts by parents can include things like vehicles, and it seems it’s not unusual for casual friends to present graduates with gifts.

A large portion of the community attends the Grad Ceremony. There are numerous scholarships distributed amongst the tiny number of graduates. Each graduate walks to the stage like a rock star, complete with personalized soundtrack a biographical sketch. There are childhood and baby photos projected on a huge screen to the accompaniment of yet another personalized soundtrack. The class history is presented, with a detailed accounting of the highlights of each of the thirteen years of school. There’s also a Promenade of Graduates and Escorts at a school assembly the day before. And the night before there’s a Banquet for graduates and up to twenty of their invited guests. A dance follows. There are extended photo sessions at the gardens for grads, family and friends. There’s a Grad Tea after the actual ceremony to which the community is invited. And it all wraps up with a huge boozy party that night.

Our family has scant proclivity for celebratory hoopla at the best of times, but with our unconventional educational choices, Erin’s nominal but essentially very-part-time participation in school for just the past four years, and her departure to begin the next big step in her education having taken place a year ago, it all felt a little odd. To not take it seriously, to not ooze enthusiasm and excitement, would seem like a slap in the face of community values. But really, we couldn’t bring ourselves to put it all on to the nines.

So we tried to walk a middle line. We submitted the baby photos, she chose her soundtrack music. She bought a grad dress ($40, including shipping, off eBay). She returned to BC. She participated. She invited her immediate family to the grad banquet. She did the Promenade at the school assembly, with her brother as a stand-in “escort.” She smiled and looked beautiful and comfortable on stage during the epic-length ceremony.

Sophie and Noah had their final three Corazón performances during the Grad Ceremony … in Nelson. So they didn’t attend: only Fiona, Chuck and I were there. We didn’t even bring a camera, though we toyed with the idea of bringing one as a prop just so we wouldn’t look bad.

And after the ceremony we peeled out after a few minutes at the Tea and went to Nelson to catch a Corazón performance. Erin got the chance to hug all the Corazón people she’d been missing all year, and then we went out to dinner, picked up the local Corazón kids after their final performance, drove home late and skipped the booze-up.

Erin netted the better part of $4K in scholarship money at the Grad Ceremony. Combined with her cushy admission scholarship from McGill, she’s sitting pretty. She’ll spend the summer at Canada’s National Youth Orchestra again. And then in the fall she’ll finally be enrolled in the BMus Performance program at McGill, where she’ll be able to continue studying with her wonderful teacher and will be able to have the full immersion in music in an academic environment.

This past year has certainly not been without its challenges. The organizational wrinkles that come of having a legal minor living several provinces away with neither a host family nor an educational institution to provide support are not to be underestimated. But she has coped admirably, and thrived musically and personally. And the net result is that she is miles ahead of typical high school graduates in terms of preparedness for living and studying on her own next year.

She knows the city. She knows her teacher. Her solo repertoire is planned out for the next year. She has a great place to live and knows the intricacies of the transit system. She knows how to get health care. She knows the good grocery stores. She knows the dodgy neighbourhoods, the friendly cafés, the quirky laundry machines. She knows where to easily get printer cartridges and bow rehairs and how to shop and cook and clean and organize for herself. She knows how to structure her time for practicing, study, exercise and daily-living tasks. She has a network of friends and acquaintances within and outside of the McGill Faculty of Music.

Now it just remains to enjoy her summer at NYO and dive headlong into university.

Postscript mommy brag: Upon snooping in the letters describing her local scholarships, it appears she won the one for the student with the top marks. And I only heard via her school principal, who was in touch with her violin teacher that Erin’s McGill audition placed her #3 in a field over over 50 at what is currently the best-regarded string performance program in the country.