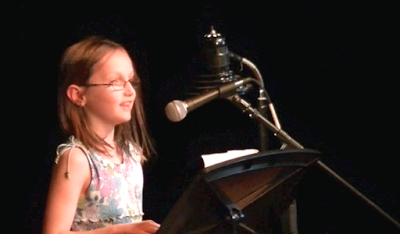 The Arts & Writers School and Community Coffee House was last night. It’s the culmination of a week of electives and workshops held at the school with a variety of local and guest artists. In the gallery space was the artwork the kids had produced throughout the week in classrooms, on the lakeshore, in canoes. In the main theatre area the performing arts presentations were queued up.

Fiona was among a couple of dozen students who chose to read some writing to the assembled crowd of parents and community members. She was strangely comfortable, perhaps even eager, in the spotlight. She introduced her piece casually with a couple of leading comments, and then read it clearly and expressively, pausing perfectly before the last line which brought closure and more than a few appreciative chuckles. 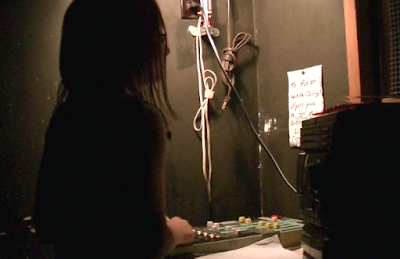 Then she headed to the lighting booth. I’m not sure exactly why she was asked to be the lighting technician for the high school play. Likely it was because in addition to her strong work ethic and ability to focus in chaotic situations, she was the one elementary student who was both well known to the theatre coaches and not assigned to particular full-time school classroom. Anyway, she had been commandeered on the final day of the theatre workshop to do lighting for the play. Armed with a copy of the script and lighting directions she managed the console, dimming and flooding, flickering, switching between full-stage illumination and a fixed spotlight. One of the theatre coaches helped by providing a bit of prompting but mostly he was too busy with the actors and Fiona worked on her own. She did a great job!

She was with the school kids for about three full days this week. Except for the last day with the high schoolers she was with the combined Grade 2/3/4/5 classrooms. She really enjoyed herself, but mostly for the reasons that had little to do with the other kids or the sense of being “in school.” She connected beautifully with the adult mentors, and loved many of the activities. She loved the feeling of having a schedule and being busy, juggling a variety of activities, being a little independent person not part of a herd, who could get herself places and look after herself without adult shepherding. On the other side she was able to see some of the challenges of school: the early nights and mornings of tired rushing, the disruptive immature behaviour that cropped up repeatedly even amongst kids considerably older than herself, the brusqueness and judgmentalism of a couple of the adults at the school, the weird pseudo-maturity of young children trying to emulate teenagers, and the fact that school is a haven for contagious viruses, resulting in an inevitable nasty cold for her by day 5.

I think Fiona would really enjoy attending a school that suited her. For this past week, our local school with its flexible multi-age enrichment activities has suited her well. But I think it also became clear to her from this little glimpse that “regular school” here would not be a good fit for her. And I agree, so it’s all good.