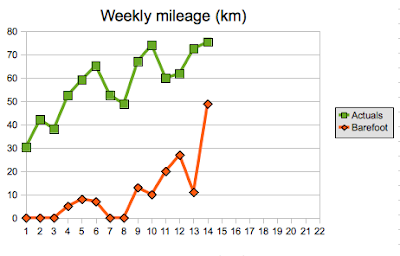 Marathon training is going pretty well. The green line shows the number of kilometres I’ve run per week of my training schedule. It’s increased dramatically as the weeks have passed, taking “step-back weeks” on occasion to allow my body recovery time following two or three weeks of significant increases. That’s the sensible way to do it, I’m told, and it seems to be working. No significant injuries thus far. 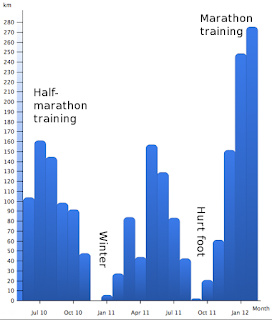 It’s a lot of running for me. To put this mileage in perspective, look at my monthly trend over the past couple of years. January ’12 was an all-time high-mileage month for me: about 70% more kilometres than I’d ever run in a month before. February was higher again, and March will almost certainly be higher than February.

The really cool thing is that this peak in mileage has occurred even though it is the absolute most difficult time of year to run. The treadmills at the fitness centre are both broken this year, so I haven’t even had that option. Look at last winter’s mileage: nothing in December, and not much more than that until May. But I haven’t let the cold temperatures and occasionally atrocious road conditions dissuade me this year.

I’m trying to increase my barefoot mileage. That’s the orange-red line on the first graph. Weather conditions have turned out not to be nearly the obstacle I had thought, but it took me a while to realize that. By week 9 I began really pushing to increase my barefoot mileage and moved my distance from 2-3 km at a time up to 8 km. I also built up to being able to run barefoot on back-to-back days as my soles seemed to be getting well enough conditioned to be resistant to damage. Last week’s big spike unfortunately produced a blister the day I did 15 barefoot km’s after 11 soggy shod km’s. I think the blister was already well on its way when I dropped my shoes — which was in fact why I dropped them — but the barefoot running wasn’t any better, and of course has suffered more this week for the blister. Still, I’m hopeful that a week of duct tape and some moderation will fix that.

And here again is my cumulative 2012 mileage ticker. I wonder if I’ll meet my goal for the year by running my marathon on May 6th? After that the trails will have opened up, and I expect I’ll be happily running through the forest, having abandoned training goals and simply enjoying being out there. Fewer charts and graphs, more photos.
Mileage and blisters

One thought on “Mileage and blisters”