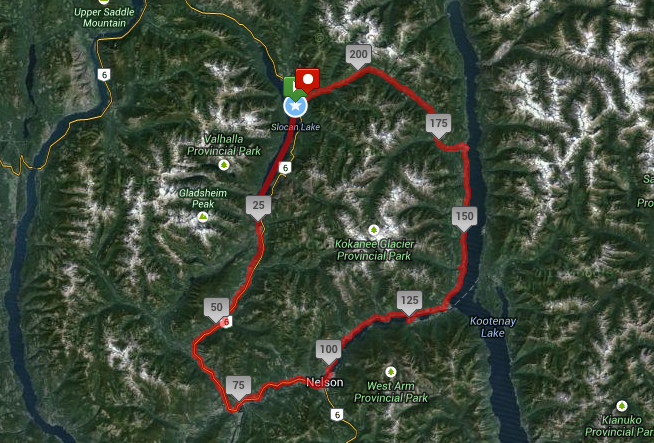 This circle route is one of those off-the-beaten-path gems. We live at the northwest corner of it. Once they widened the road at Cape Horn (at km 25 on the map) in the early 1990s, the motor homes began trundling through in ever greater numbers. Motorcyclists discovered it a decade or so ago and from the May long weekend until Labour Day we hear them droning by on the highway in clusters.

When we first moved here I used to think about bicycling it. Could I do it in a day? I never tried. Life was too busy.

In the depths of last winter, while bemoaning the fact that I wouldn’t be able to participate in SufferFest this year due to family conflicts, it suddenly occurred to me that I could turn the circle route into an endurance triathlon of sorts. Rather than taking roads the whole way, I’d do my first day on the lake in a kayak and day 2 would be a trail run along the Slocan Valley rail trail. The next day would be road-running from the bottom of the Slocan Valley over through Nelson and up the north shore of the West Arm of Kootenay Lake. And the last day would have me on my bicycle heading through Kaslo and over the pass back home.

I had originally hoped to carve out time at the end of June. But family and SVI responsibilities piled on. Then I had be around to get Erin when she got back from Europe, and then Fiona was asked to help out with the Music Explorers program, and had the Dance program to do, the combination taking up two weeks. So here we are in the third week of July already and I haven’t set out, nor have I really committed to doing it. Until today.

I’ve worked really hard to get the SVI administrative stuff done. Noah is solid with his work schedule. Sophie has just started her job, but she’s confident she can get back and forth by bike or on foot as needed. Fiona and Erin will be having a low-key few days at home. Erin has one gig, but I’ve organized a ride for her. Chuck will be on call. Provided I stock the fridge and pantry with lots of food, I have their blessing to leave. So I booked a place to stay for the first night and arranged to rent a kayak and — gulp! — I think I’m going.

I have no doubt that I can manage each leg of the challenge on its own. What worries me is putting them together in the space of three or four days. What will I feel like on the morning of the third day, having run 70 kilometres over the previous day and a bit, facing 35 more and then a bike ride over the pass?

I suppose I’m going to find out.