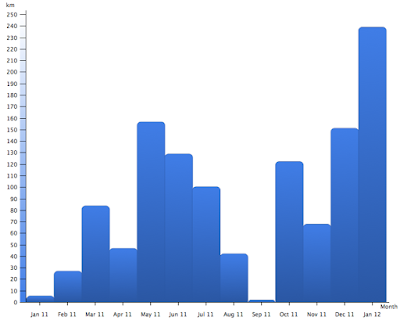 Here is my running mileage during 2011 and thus far in 2012, broken down by month. At least, these are the runs I used my Garmin for — most of them, to be sure.

There are two obvious nadirs. One was in August/September, when I hurt my foot. I did a lot of biking during that time, but didn’t run for about 7 weeks.

Then there’s last winter, shown at the beginning of the graph. Winter is a tough time to run around here. The trails are inaccessible, the road is gnarly and slushy and slippery and boring.

Which is why I’m pleased with my mileage this year. It hasn’t been easy. The treadmills at the fitness centre are both broken so I’m stuck with the outdoor conditions, whatever they are. I’ve run in -23ºC temperatures, in fog with driving sleet, through mounds of slush, across gleaming slopes of ice, through snow that had me high-stepping, I’ve developed an appreciative relationship with the snowplough crew whom I tend to see most days lately (I cross the road, they honk and wave thanks, I wave thanks), I’ve arrived home soaked to the skin or with heaps of snow piled on my shoulders and head. January last year I ran 5 km. This year I’ll have run 250 km by the end of the month.

My beloved Minimuses are beginning to fall apart after about 700 km of use. I can’t wait to pick up a pair of Minimus WT Zeros, the upcoming, even-more-minimalist shoe due out in March or April. I’ll have to come up with something in the meantime. I’ve noticed that my Merrells tend to trigger my Achilles tendonitis, so I’ve set them aside for now. I’m thinking of picking up some New Balance WT110s. They’re the evolved descendant of the WT100s I bought a year and a half ago, enjoyed for a few weeks and then surrendered to Erin, who needed them more than I did, liked them a lot and continues to run in them. I liked them during my brief stint with them in 2010, and I think I’ll probably like the pared-down newer model even better.

One thought on “Running mileage”