So we got a new vehicle. Compared to the old one it’s less boxy, less black, cuter and smaller. It’s also less backwards, having the steering wheel on the left, a fact that makes my three (yes three!) kids with Learner’s Permits much happier. I think that we now have some hope of actually getting one or two of them to the next stage of licensure. 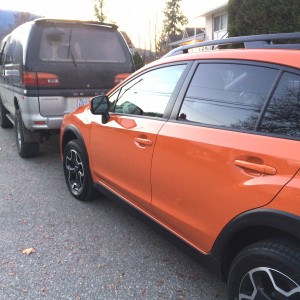 The new car is a five-seater Subaru CrossTrek. Now that we’re rarely a family of six, or even five, we no longer needed the passenger space the Delica offered. Since the Deli was reaching its 21st birthday and beginning to show its age, we decided to opt for something newer, smaller and more fuel-efficient. I love the CrossTrek so far. It gets an extra 160 km from a tank of fuel compared to the Delica (and it was actually pretty good) and has the high ground clearance and AWD that are necessities where we live. Furthermore it has all sorts of nice safety features like airbags, ABS and traction control, things that are pretty standard these days but which the Deli was missing. 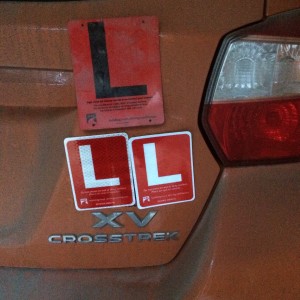 So we’re a three-L family, and I think we’ll be hard-pressed to share the driving experience out over the holidays. By rights Erin and Noah should already by onto the next stage in the graduating licensing, but it hasn’t happened. I really don’t know what it is about this generation that they don’t relish getting their driver’s licenses the way my generation did. It may be that this is regional, and that in other parts of the country it’s different. But here, there doesn’t seem to be a headlong dash towards learning to drive the instant kids turn 16. A few kids, sure, they’re in a hurry but a lot seem to have no interest. For my kids and the majority of their friends it’s just not a priority.

I wonder about a few factors. First, the graduated license program, which I completely understand the reasoning behind, has had the effect of pushing full licensure out of the high school years. In BC if you move quickly, you can have a partial license as early as your 17th birthday, but full licensure (meaning being able to carry more than one passenger without restrictions on time of day, etc.) has to wait until well into legal adulthood. So driving just isn’t part of the high school culture. Kids don’t see their slightly older friends enjoying the perks of being fully licensed, encouraging them to look forward to becoming so themselves.

Then there are the economic constraints. When I was 17, gas cost 23 cents a litre. Around here we’ve been paying more than five times that much. Inflation only accounts for about half that change. So cars are more expensive to buy, insure, fill and maintain, even taking inflation into account, and higher education costs more than ever. How likely is it that a university-bound young adult these days will own a car? Not very!

And then there’s other fallout of the graduated licensing system: it makes it expensive and inconvenient for teens to get enough practice to prior to doing their road tests, since (at least in our case) they’ve moved away from home by the time they’re age-eligible. Living in big cities, with ample public transit, thankfully, on shoestring budgets and with no access to a family vehicle, they are mostly limited to few weeks of rural driving in the summer to get the driving experience and confidence they need to do their first road test.

(I should say that I have a similar beef with the practice in some jurisdictions of pushing the legal drinking age well into adulthood — particular as old as 21. It means that it’s difficult for parents to provide support and guidance as their offspring venture forth into these new areas of responsibility. Hey kids, there’s something we think carries a bit of risk, so we’re not gonna let you try it until you’re a bit older and completely on your own.)

Finally, for my kids at least, there’s the fact that they’ve had a lot of autonomy and independence already. Erin travelled to SE Asia, and took herself to Alberta once a month when she was 14 and 15. Noah went to Cuba as well as various other Canadian locations with his choir and has couch-surfed a bit in Nelson. Sophie’s already living on her own a few days a week. All three kids made their own educational choices, whether as unschoolers or by choosing to attend school. Maybe a driver’s license doesn’t have the same symbolic value for them as a marker of the passage into independence and autonomy.

At any rate, it’s not part of high school culture because you now have to be older, and that makes getting enough learn-to-drive experience is awkward and expensive, and my kids have already got a fair bit of independence, so what’s the big deal with driving? Why bother to learn? In our case if you then add the disincentive of learning in a boxy high van with the steering wheel and controls all on the wrong sides and you’ll understand why we’re all stuck at the L stage here.

It turns out it may be Sophie pushing the older siblings forward here. She turned 16 recently, got her L and has actually seen the wisdom in knocking off as much of the learn-to-drive process as she can while she’s still living at home, even if the payoff may end up being many years down the line. Perhaps several years after graduating from university she’ll finally having enough income to buy her own car, and won’t have to pay to take a several-months-long Driving School course at that point.

She’s pushed herself past the “freakin’ stressed out” stage of being behind the wheel and is now to the point of enjoying our lonely rural drive back and forth from Nelson. She’s getting experience with all kinds of weather and is learning to keep her eyes peeled for black ice and deer eyes glinting in the dark. What she’s not getting enough of yet is dealing with traffic patterns in city environments, but Nelson is big enough that she’ll accrue that over time.

Orange is the new black