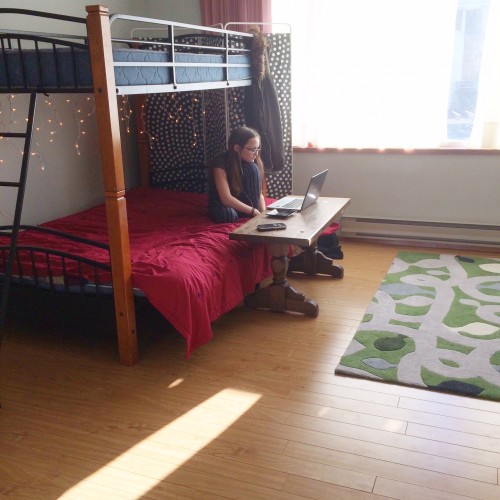 haring our lives out between two residences feels good in a number of ways. The travel doesn’t feel onerous: Fiona and I are doing two trips a week, just like we did all last year.

For Sophie I think it’s turning out to be an unqualified success. She’s happy, she has a nice social group, she’s challenged at school, she’s involved in peer tutoring and another support group for girls, she’s really excelling academically, she loves her teachers, she’s able to be involved in more extra-curricular activities. And she’s getting comfortable and confident with a certain amount of self-sufficient living, up to a few days in a row.

For Chuck and me it’s fine. I wish I had more to do in town. I’ve been running, and knitting, and reading, and catching up on my continuing medical education, and I do a lot of the housekeeping and all the shopping for the two households and a fair bit of taxiing of girls. Chuck spends a lot of evenings home by himself. Fiona and I are normally away two or three overnights a week, but there are another two days that we get back well into the evening. We got a kitten, christened Leopold Leopoldovich. Chuck and Leo seem to be fairly deeply bonded.

For Fiona, there’s good and there’s bad. The really good stuff is how much she’s been able to take advantage of activities in town. She’s been using the library, doing three hours of dance a week, two and a half hours of gymnastics, three hours of sewing workshop, an hour of choir and an hour of violin lesson. Dance is where she’s really been able to soar: doing the ballet technique class has resulted in huge leaps in her ability, and now in the New Year she’ll be adding two more hours of ballet. She really loves it, and without the crashpad there’s no way she could have poured herself into this with such talent and interest.

The not-good part is illustrated in the photo above.  This is what Fiona does most of the time she’s not at a scheduled activity. The house is too small and under-furnished to contain any of her personal possessions: we live out of overnight bags and carry just a few things back and forth with us. We don’t have any personal space: we sleep in the open kitchen/living area, so we don’t feel right spreading out and taking over, especially since we’re sharing the house with Sophie and another girl and sometimes the other girl’s mom. So it doesn’t feel like home to Fiona at all, and she just parks herself in front of her computer and watches videos, and tells me she doesn’t feel like doing anything else while she’s at the crashpad. And since dance classes wrapped up in early December, right now it feels especially bad.

And of course, introvert that she is, when she gets back home to her own bedroom, she loves to cozy up in there and decompress from the crashpad experience of feeling like a guest in a shared space. So … I worry. So much solitary time. So much screen time. So little creativity and initiative.

Like I say, it’s felt especially troublesome in the last week or two because she’s not as busy with dance, and that will get back in full(er) swing again in the New Year. But I think we will need to figure out a way of living a bit differently. She is not happy either about how the fallow time at the crashpad feels.

Still, on balance there’s more good than bad. We’ll figure it out, I’m sure.