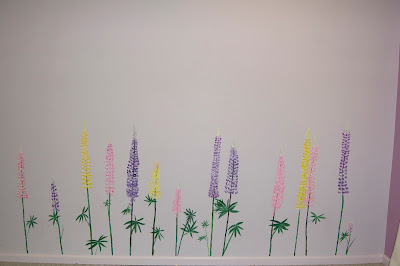 Fiona and I painted this along the wall of Sophie’s bedroom while she was gone to a choral festival in Edmonton. We had hoped to do it on her birthday while she was at school, but there was a power failure that day, and not only were things dark and cold in the room as a result, but we were quite challenged just pulling together a birthday dinner and the requisitioned coconut cream pie. Fortunately the power came on just before supper and we squeezed in the pie baking. The crust, incidentally, was awesome — the best I’ve ever made by a good shot, I think.

So we postponed the lupine painting until Sophie and Noah had left for Voices West. The call was to meet the bus at 5:30 am in Nelson, so needless to say we sent them the night before. They went down with a friend and stayed overnight at the hostel. Not much sleep was had, of course. Then they spent about 12 raucous hours on the tour bus, and thereafter headed to rehearsals! Thus began a weekend of ecstatic energy … and sleep deprivation.

Here is the mass choir performing the next morning at the Remembrance Day ceremony:

And the group lunch at a large restaurant the next day:

The final concert was that evening, and then it was back on the bus the next morning for another 12 hours. The concert videos are still pending. By all accounts it was the most amazing experience: a love-fest of great voices and amazing young people. I am so grateful that my kids have the opportunity to be part of Corazón.