We took possession of the Nelson house about four weeks ago. Sophie and Noah are more or less living there for the summer. Sophie is working full-time at a café. Noah is (theoretically at least) working on the house, though he has spent a surprising amount of time being sick with a series of colds, and also maintaining his social life.

We were pleasantly surprised to discover that several old but functional appliances had been left behind by the previous owners, so we haven’t had to scramble to buy those.

We have had a bit of a scramble to get furniture. We had an old sofa and loveseat, and a broken metal bunk bed, but that was about it. So we’ve been busily buying bedroom furniture, dining table, futons, futon frames and chairs. We still need a few things … a bedroom and a half still need to be furnished, a desk would be nice, and the rest of the living room furniture (coffee table in particular) needs to be sourced. But thanks to the leftovers from the previous owner and the internet-based used-furniture market, it’s been cheaper than we had expected to deal with the furnishings.

Which is good because I of course forgot how quickly the little and not-so-little other stuff adds up. Garden hose, garbage bins, curtains, light bulbs, cleaning equipment and supplies, small appliances for the kitchen, dishes, cutlery, frying pans, shower caddy, lighting fixtures, replacement faucets and dryer ducting and door lock-sets.

It was pretty filthy, and there was lots of garbage that needed to go to the dump. It’s still pretty filthy in a lot of places, but things are coming along on the main floor. We have Sophie ensconced a furnished main-floor bedroom, and Noah is making do in another such bedroom, partly furnished and unpainted but at least clean.

Upstairs is another matter. It’s carpeted and extremely hot in our record heat wave, so it smells terrible. Hopefully we’ll get the carpet out soon. The little bedroom that is up there is cleaner though, and we’ve thrown a cheap air conditioner in the window and thus managed to make a passable guest bedroom.

The ultimate plan is to completely renovate the upstairs, adding a dormer that will give us the space for a second bathroom, melding the little bedroom with the remaining space to create something closer to a master bedroom. Once we complete that we’ll have three proper bedrooms, two bathrooms and a small guest room or office space at the front of the house. That will work beautifully for us for next year. Sophie and Fiona can each have their own bedrooms, there will be a parental bedroom, and one more flex room that can house visitors or possibly a roommate.

After that there is plenty more that can be done. We’ll replace the siding, renovate both the kitchen and the downstairs bathroom. There’s some basement work that could be done. Maybe the panelling-and-wallpaper walls in the front part of the living room will get upgraded. Landscaping, fencing, rehabilitating the gardens, dealing with the fruit trees, fixing the “driveway,”… the list goes on. But the house, considering its age, the price we got it for and the filth and neglect, is surprisingly liveable already. 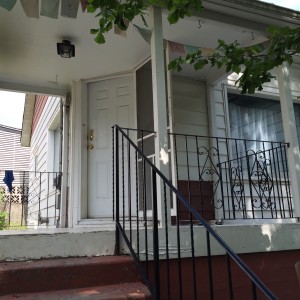 This weekend will be another work-party expedition to Nelson for Chuck, Fiona and me. Hopefully Noah will have walls prepped in a couple of rooms for painting, and we might get to some drywalling in the front bedroom, where there is currently a combination of rotting plaster-and-lath, vermiculite, pressboard, textured wallpaper and graffiti. I think we’ll actually have the luxury of being able to stay overnight.