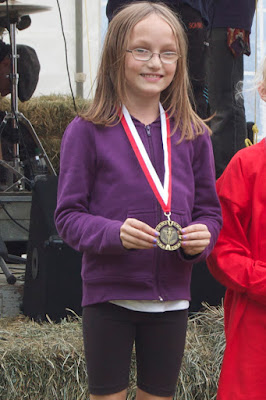 Fiona was the only one of us competing in this year’s SufferFest. Sophie is too busy with the new pursuits of full-time school and membership in the Corazón Vocal Ensemble to have the time or interest in running. I injured my foot in mid-August and have been unable to run for the past six weeks.

But the middle kids were performing with their trio in the live music tent, and Fiona decided she would like to run her race. She hasn’t had a running buddy for the past couple of months and therefore had hardly trained, but she knew it would be an easy run (2k) to finish; it was just a question of how fast she would like to push herself.

Last year’s time on the same course was 11:19. I have a feeling this year’s time was a lot faster. Maybe even a couple of minutes faster — impressive especially since she strained her calf muscle the other day and it really interfered with her stride today. We’ll have her official time in a couple of days. In the meantime she’s justifiably proud of her age-group medal.