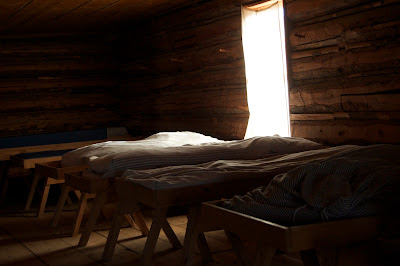 One hundred and fourteen years, to be exact. A homeschoolers field trip to the historically recreated Fort Steele was perfectly timed. Less than two weeks after Erin’s exciting departure to Montreal, and four days after Noah and Sophie headed out on a week-long all-high-school cross-curricular out-trip, Fiona was presented with the option of joining our regional homeschool group for this weekend trip. 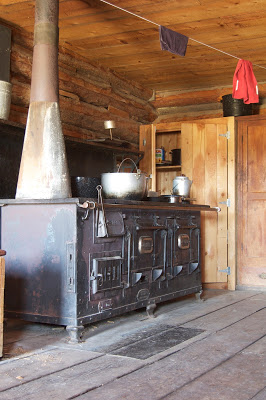 We stayed in the original barracks of the North-West Mounted Police, a huge long single-story cob-chinked building equipped with about four dozen wooden cots with straw tick mattresses. Across the quadrangle was the cook-house where we used this huge wood cook-stove to bake corn bread, cook soup and porridge and brew up cocoa and coffee. Meals were mostly done by families individually but in a very collaborative way. (“Extra pancakes, going fast!” and “Who brought extra salt?” and “Tons of rice pasta. Can anyone use it?”) To clean up we hauled water in buckets, heated it on the wood stove and washed our enamels metal spoons, cups and bowls by hand in grand assembly-line style. 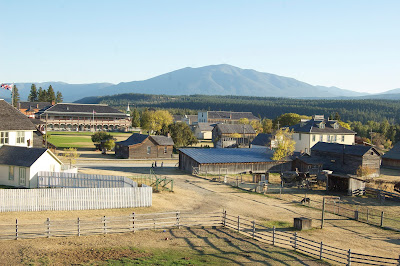 At 5 pm each evening the gates were locked and we were left with the village all to ourselves. The curator and a couple of other live-in staff remained overnight but basically it felt like our village. We were free to roam all over it, to open sheds, to check on the animals, to poke around the alleys, the stagecoaches, the cabins. The streets were empty, except for the fifty or so of us. We no longer felt like visitors. Those magical evening hours transported us in a way a daytime visit never would have.

We had evening bonfires. The kids set each other scavenger games. They played tag and cops & robbers. We watched the stars. Listened to trains. Shared each others’ stories. 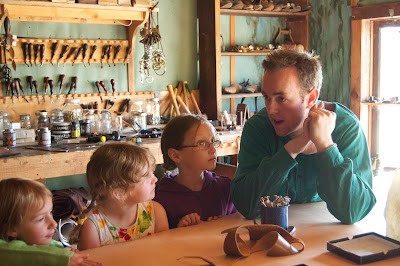 And in the daytimes the kids had workshops, with a variety of knowledgeable and passionate guides who never talked down to anyone and let the kids do lots of hands-on projects. They had a morning of leather-working, an afternoon in the blacksmith’s shop shaping nails.  They hand-churned butter, and made jonnycakes using a recipe from Sam Steele’s own notebook. 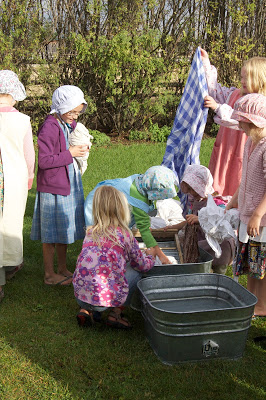 They even brought out the collection of kids’ costumes for us at no charge and let the children find breeches and pinafores and bonnets. Fiona found a chambray smock and bonnet to go with her purple hoodie.

They learned to churn butter, and were put to work hand-washing laundry, scrubbing it on a laundry board, cranking it through a wringer and hanging it to dry. 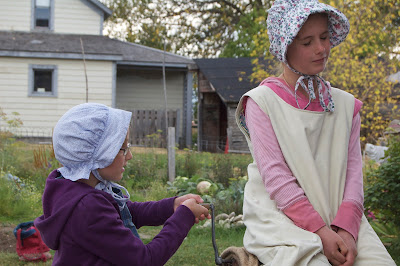 There was cinnamon flavoured ice cream to be churned. (Who knew the ice cream churn would require both a churner and a “sitter”?) 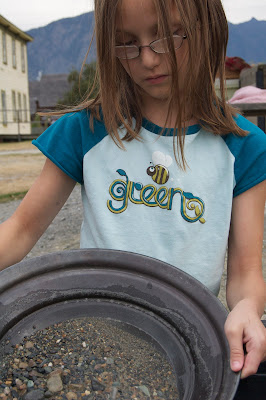 And there was gold to be panned for. Flakes were added to each child’s pan and I think they all found their flakes successfully. There is gold found naturally in the creeks to this day, but it’s scanty compared to the 1860s. Only two pans had flakes of gold without being “salted” by our prospector-guide.

Fiona really really loves history now. Canadian history was on her learning plan anyway, and this has started the year off with a bang.