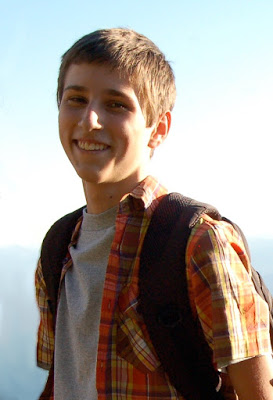 Erin and Sophie look like the ones making the big moves this year, but Noah is on a new path of his own that represents at least as big a shift.

He stopped computer-gaming. He went through a phase early in the summer of watching movies (dozens of them — classics from the past five decades or so). And then that tapered off and he started writing. In on-line discussion forums devoted to Big Ideas (and some small ones too). To friends far and wide via immensely verbose chats. And on a blog somewhere in his own private corner of the webiverse.

He matter-of-factly decided, sometime over the course of the summer, that he was ready to go to school part-time. Maybe a course or two. Maybe a bit more. And he’d like some new clothes, a few of them, that actually fit and looked nice. And a haircut, please.

He started practicing his viola. A lot. He was suddenly in love with the entire Schubert Arpgeggione Sonata and the Rapsodie from the Bloch Suite Hébraique. His playing started to really soar.

And so it goes. We’re now two weeks into the school year. He’s at school a little more than half-time, taking Social Studies (i.e. Canadian History), English, Math and Writing. He seems to be opting for the high school diploma route and is well-situated, being a couple of credits “ahead” based on the work he did through the DL program last year. As a home-based learner he’ll also be earning credits this year in Choral Music, Science, Digital Media, PE and possibly also Physics. He’s going to be busy with Summit Strings, a number of gigs with the Symphony of the Kootenays, and of course the Corazón Vocal Ensemble.

And the travel! He’s not only willing, but almost enthusiastic about travelling away from home and family. September includes a week-long cross-curricular out-trip through the BC interior and Alberta. October is a three-day trip to Banff for WordFest with his writing class. November he’ll be off to Edmonton for a Youth Choir Festival. March will likely see him travelling to Montreal to visit Erin. At the end of April he’ll be going to Cuba with Corazón for ten days of performing, workshopping and touring about.

He seems really happy and energized. I’m so happy for him!