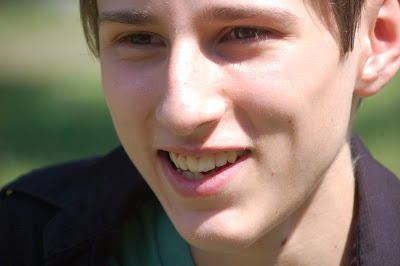 Who is this young man who has grown up amidst our three daughters? He can make me laugh a hundred times an hour with comments that belie a razor sharp mind. Random, sarcastic repartee, self-deprecating, ironic … and always dry and off-the-wall.

For the first time ever, this week I took him clothes shopping. The complete lack of anything resembling a wardrobe and an awakening interest in such things gave him a certain amount of motivation. For instance he had one pair of non-dress pants that fit, and his only footwear was a pair of outgrown sandals from two years ago and a pair of black dress shoes. No casual shoes, no sneakers, nothing.

We had a relatively enjoyable productive shopping expedition. Now he has clothes again, and they’re mostly men’s clothes. He’s still a bit small for 14, but he’s definitely growing and the new wardrobe has created a visual shift towards adulthood. That and these lovely photos of him from last week. 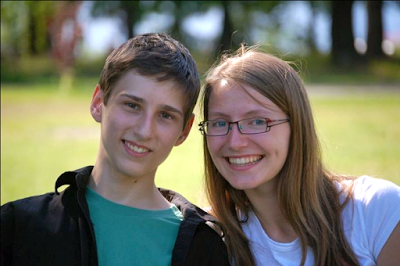 How cute is this one? These two have grown up in the same Suzuki program here. They’re practically siblings. It’s not like a guy with three sisters needs an auxiliary sister, but hey, this one can get Noah to stretch himself in ways the others can’t. These two have sung in the same choirs every year, they’ve played in all the same chamber ensembles from their very first string quartet and orchestra experiences to their recent quintet, chamber orchestra and string orchestra placements at SVI. I can only think of two or three significant musical experiences that they’ve had apart from each other compared to the dozens and dozens they’ve had together. And this is the world’s cutest picture of both of them. Sophie shot it: Noah would never have looked this angelic if I’d been behind the camera!

4 thoughts on “This young man”