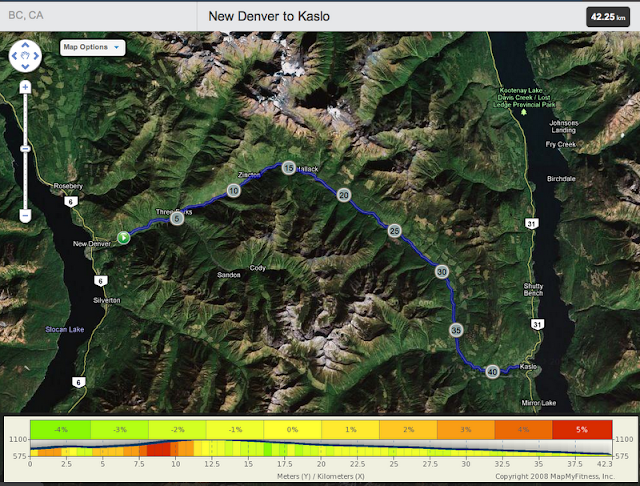 Two years ago I discovered that the distance between my driveway and the next village to the east was a few hundred metres over official marathon distance. This weekend it finally worked out for me to run it: I had built enough of a running “base,” logged enough long challenging runs, was feeling pretty good, had a day off, and Chuck was available to come and get me at the end. Unfortunately in order to time the pick-up properly I had to leave later than I’d hoped and ran through a pretty hot part of the day. I think it was around 23ºC in full sun, though with a nice breeze. Far hotter than I prefer to run, definitely slowing me down, but not completely horrid.

I didn’t see any bears or large wildlife. The highway is relatively busy on this July 1st long weekend with  maybe an average of a vehicle every minute. Mostly Albertan motorcyclists, and lots of motorhomes and American tourists. I did get attacked by a grouse. I must have startled it, running close to its nest in the roadside ditch. It flapped towards me in full display, hissing and vibrating and making for my ankles. I laughed out loud and it gave up after about 3 metres.

I ran the first quarter barefoot. Not wanting to blister my feet I put my shoes on at that point. As it turned it this might have been the wrong choice: I ended up getting a shoe blister from my toes rubbing against each other despite the large-ish toebox in the Minimuses. But I didn’t really notice it much until I was done. My Achilles tendons and ankles were feeling things by the last 10 miles, and I’ll probably pay the price for a couple of days, but all things considered I felt pretty good. Didn’t hit the legendary wall, and my pace (light green line, punctuated by spikes for putting on shoes, refilling my water or peeing) stayed reasonably consistent throughout, taking into account the elevation profile:

My aim was to enjoy myself, so I didn’t push hard. I finished in 4:40. Chuck and Fiona arrived about ten minutes later and took me out for a milkshake. It feels nice to know that I can log the miles equivalent to a marathon. Maybe I’ll actually run an official one someday.
Long run