You can look at this photo for purposes of comparison. With the lower bunk gone, there is actually a 140 cm width of floor space in Fiona’s bedroom now.

Sophie is happily, very happily, ensconced in her purple room in the basement. The old European-length single bedframe wouldn’t fit, so we’ve had to order a new frame. For now she’s on a mattress on the floor. So we’ll save photos for when her curtains and bedframe arrive.

Fiona finished cleaning her room today. She was able to install the desk surface under the loft bed. Once upon a time Erin had this room to herself and used the desk. That would have been 11 years ago, when Sophie was still a baby. Once Sophie moved out of her parents’ room, the desk nook became a second bed and thus is stayed, although there was a game of musical girls as a new one joined the family and a teenager moved out to the cabin.

Sophie and Fiona have done very well as roommates over the years. But Sophie, ever the middle child (being not only middle in age, but the middle girl), and now almost 13, really needs her own space in a home that is pretty small, and pretty full of family members, pretty much all the time. 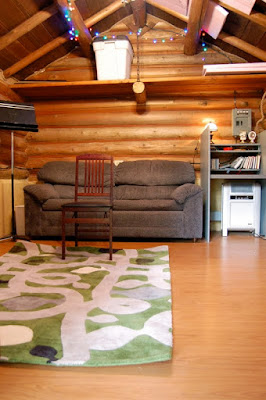 I think Erin will be happy with the cabin when she comes home for a couple of weeks in August. It’s primarily my teaching space now, but it’s clean, tidy, well organized and has a cozy feel. The pull-out couch will allow it to function as a guest room. And I left her Christmas light décor up to keep her happy. We just need to winterize it properly so that I can continue to use it from October to April. Fortunately the parent of one of my students has tons of experience with alternative homebuilding and workarounds for situations like this, and he’s suggested a few good outside-the-box ideas.