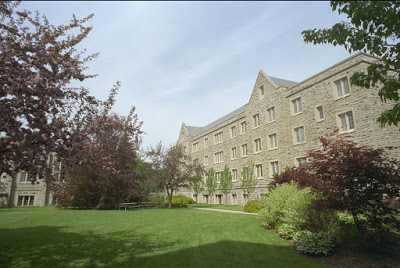 This is where Erin is living right now. Curiously enough it’s the same university residence system I lived in when I first left home. Almost, but not quite, the same building.

I dropped her off at the airport a couple of weeks ago. The day before we’d arrived in Kelowna in time to do some shopping. She bought herself an iPhone 4. Three and a half years ago we bought a family cellphone that was a low-end dinosaur even then. Erin has used it during her various travels so far, but it was time to move on. She needs a phone of her own, something with more functionality. She won’t have a land line next year, so the cellphone will be it. She needed a few gizmos to take with her for the summer and the fall: an iPod for listening to repertoire (hers had died a couple of months earlier), a metronome, a GPS device to keep her found when running and managing public transit, a camera, an alarm clock. The iPhone is all those things, and more. She subscribed with a Montreal number, so she’s all set.

For the summer she’s in Ontario, on the UWO campus. She arrived without any difficulty. NYO staff picked her up at the airport. Sweet! She’s sharing a room with nice violist whom she really likes. She has 6-10 hours of music programming a day. She’s trying to practice 3 hours and run 5k each day in addition to that. Within three days of heady music immersion she was saying that it felt like she’d been there her whole life already. She’s lost her sense of time. Days seem like weeks. The intensity of the musical and social experience is playing tricks on her mind like that. She’s found friends to run with. She performed the complete Haydn Sunrise Quartet today, and loves her quartet-mates. Everyone is awesome — they’re so musically capable, so motivated, so friendly and unassuming. There are occasional swing dance sessions for recreation. Meals are veggie-friendly and delicious if you stay with the salad bar.

The schedule shifts from mostly strings / mostly chamber music to a full symphonic focus in the next couple of days.

In short, she’s thrilled. She’s in her element, with young people just like her. If you’re in Ontario, Quebec or the Maritimes (or even New Hampshire) you may be able to catch the NYO in performance somewhere on their tour schedule.

3 thoughts on “Her summer”