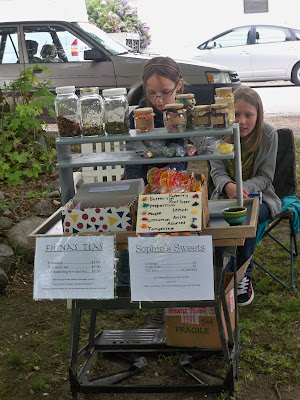 It was a cool day with a little bit of sun and the first Friday Market of the year was fairly slow. The late spring and cool temperatures have kept the tourists away, and the kids are still in school.

Still, business was brisk at the Tea & Sweets stall. Fiona sold out of all the teas she had packaged up. Sophie, who had brought considerably more stock, sold about two thirds of what she had. After paying the Market Society 10% they are both about half way to paying off their start-up costs.

What they learned: People really like loose-leaf tea around here. Raspberry is the candy flavour of choice, while lemon was relatively scorned. Lollipops go like hotcakes when there are kids around, and that demand will escalate greatly in July and August when the schools are out.

What I learned: Fiona and Sophie are excellent prioprietors. They were cheerful and attentive, and when asked they affably explained their ingredients and production methods.

People were very impressed by their customer service, packaging and by the quality of what they were offering. And they were kind and encouraging.