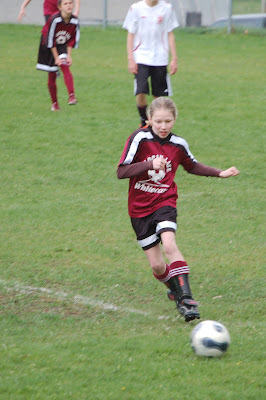 Sophie is our only soccer player this year. She hadn’t played in a couple of years but was keen to go out this year. Her team has an awesome coach. They’re actually learning strategic skills, and practicing using them in scrimmages.

There’s no league per se. Just one local team for Sophie’s age level. The organizers called around to similar small-scale community soccer programs in nearby villages and arranged a short roster of Saturday morning games. So far there are five games scheduled. In past years our local soccer teams have been part of the main roster of the larger town 40 minutes north, where there’s a big soccer program. That meant games every single blessed Saturday, most of them up there. For a family whose May and June tends to be packed with end-of-year musical performances the weekly out-of-town games and twice-weekly practices were an onerous time commitment. This feels much more managable. 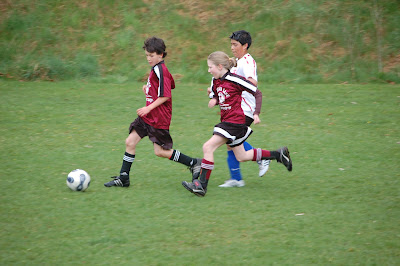 Sophie has come so far in the first three weeks of practices! It’s amazing to see her digging in and handling the ball and running and really kicking. Age-wise she’s “Grade 7” on a Grade 5/6/7 team, albeit one of the youngest Grade 7’s, so even though she’s small for her age she is no longer the tiniest kid on the field. She is really in her element skills-wise as well: challenged, but not over her head by any means.

But as an aside: how come my kid of all people has a heel strike like this?

One thought on “Soccer”