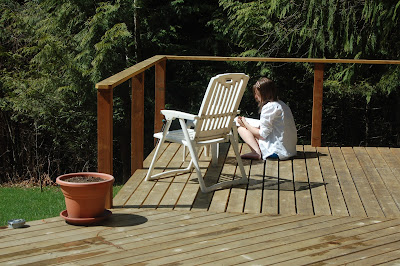 Erin returned from Corazón tour to a whole slew of English assignments. National Youth Orchestra starts before the school year ends because it’s built more around the university academic year than the high school one, so somehow she not only has to get caught up in English and her other courses, but she has to get a couple of weeks ahead so that she can do school final exams and the provincial exams before she leaves.

She has a couple of performances on piano and violin this weekend, rehearsals for the pit orchestra of a full-scale musical production in Nelson kicking into high gear, and 60 or so pages of NYO repertoire to learn too. Plus Suzuki, quartet and several more Corazon performances to round out the year. And hopefully enough time to do some serious work on her solo repertoire.

And for all these reasons I am feeling exceptionally grateful for the open-minded flexibility of the K-12 public school she’s enrolled in. I say “enrolled in” rather than “attends” for good reason. Over the past three weeks a combination of tour, choir rehearsals, school special events and such has meant that she has attended exactly one double block of English and that’s all. This is less school attendance than usual for her, but even at the best of times she goes to school less than half the time. In a typical week during the winter she might have attended for Tuesday morning and all day Wednesday. Some weeks she might have gone two other full days, or another morning, but often not.

She is not scheduled into classrooms for most of her coursework. In fact, only English 12 is a classroom-based course for her this semester. That means that technically she is scheduled to be in the Facilitated Learning Centre at the school, where students who are doing on-line courses, individual project-based courses or teacher-directed independent study courses with teacher supervision and assistance as needed and those school attendance rules satisfied to a tee. But the reality is that she is a de facto homeschooler, and the school recognizes this. She has so many musical/travel commitments, and works so well when away from the school building, that they see no reason to impose rules that make no sense for her. Why would you take a teen who submits one to three Social Studies assignments a day during Christmas holidays so that the entire year-long course is more or less wrapped up in two months, and force her to attend school to prove that she is working and learning? It would make no sense. And the school recognizes that. They’re not worried about rules for the sake of rules. They’re not concerned about “setting a precedent” by allowing this. They want to serve the best interests of this particular student. How refreshing!

And so here is what she did to catch up on schoolwork during a precious warm sunny school day this week: she sat on the deck at home. This is how she works best. She took her poetry textbook out with her, and she wrote poetry and interpretive essays. Spending a day like this within the walls of the school would give some people the satisfying sense that she was “being schooled,” but fortunately Erin, her parents and her teachers all recognize that her learning is far more efficient like this. Independent immersion-like work in comfortable surroundings.

Next year she won’t be doing any classroom based courses, and she’ll do her last few credits exclusively through on-line courseware. So she will be enrolled not through the bricks-and-mortar school but through its Distributed Learning program, which is administered through the same building and by, as it happens, the same two people who have supervised the bulk of her in-school courses. So little will change.