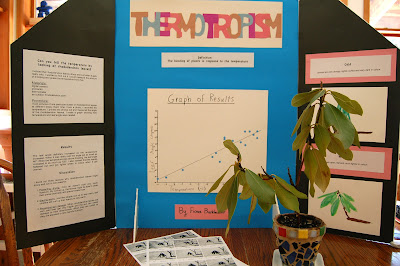 Another perk the result of our affiliation with the local public school and school district — the kids were invited to participate in the science fair. We didn’t have much notice, but Fiona was keen and we lucked into a terrific idea. She chose to investigate the changes in rhododendron leaves in response to cold temperatures. We have a large rhody bush in front of our dining room table, and enjoy using it as an informal thermometer. Over the last couple of weeks the outdoor temperature has swung wildly between -10 C and +2 C, which made for some very impressive leaf changes. 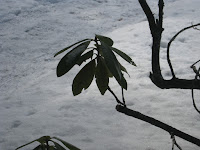 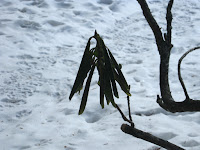 Fiona photographed the same leaf cluster at a range of temperatures over a couple of weeks. We printed the photos and she used a protractor to measure the angle the outer leaves formed. Yesterday we worked to plot a graph showing the relationship. We also found an article on-line which postulated several explanations for the phenomenon. Fiona typed up her summation of some of these explanations. She also created illustrations. We topped it all off with a fake rhodo plant in a pot … really just a recently pruned branch stuck into some dirt. 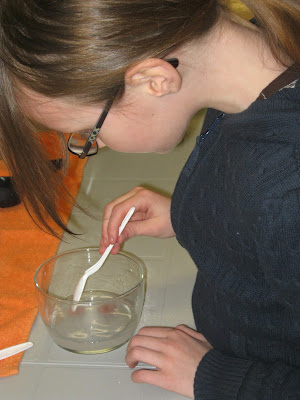 The science fair itself was fun and a little wild. Projects were presented by children from age 6 to 18. There was everything from baking soda and vinegar volcanos to frog dissections and metal alloy demonstrations. The primary teachers had created some simple hands-on science explorations for the younger kids. Fiona was just getting over a nasty cold so she faded quickly, but she had fun. She ended up with a “gold” penny from one of the secondary demonstrations, and enjoyed the activity tables.

The highlight was bumping into her DL liaison teacher who had finally managed to procure a copy of the textbook to go with her BC Science 6 workbook. She was thrilled, as she had been waiting patiently for a long time. We had to dash home and set to work with it.

One thought on “Science Fair”