Christmas is a time of traditions, of course, and teenagers and pre-teens hold onto those traditions at least as tightly as the rest of us. I suppose it’s partly nostalgia on their part, but also the alluring excuse to be completely childish. Still, some things change. 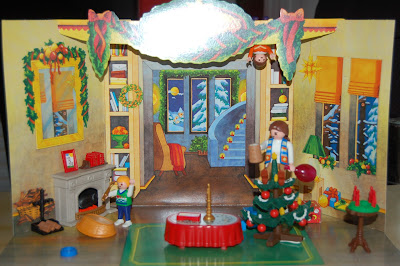 Case in point #1: the Playmobil advent calendar, used over and over for many years. This year, though, the girl-child is found hanging upside down from the garland. The boy-child has enacted a spell (or perhaps some violence) upon the kittens, overturning the cat basket on them in the process. The cat is roasting in the fire. The mom-person is partying at the top of the Christmas tree, holding a bottle of wine and taking a swig from a beer stein. For the record the wine and beer did not come from the advent calendar; they were misappropriated from the medieval castle set. 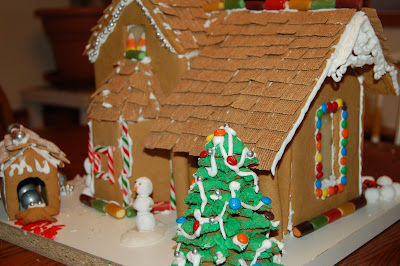 Case in point #2: The fetching gingerbread house, nicely decorated with all sorts of features and decorations, including a snowman of toffee bonbons, a tree covered in M&Ms and cola balls, translucent window glass, and a bonfire around back. But off to the left a doghouse for the family pet, a starfish named “Mu” with a penchant for exercise balls. Mu is lying in a pool of blood but seems quite content. What has happened here? “It’s a mystery!” I’m told. A crime scene, perhaps?
Slightly demented Christmas decorations