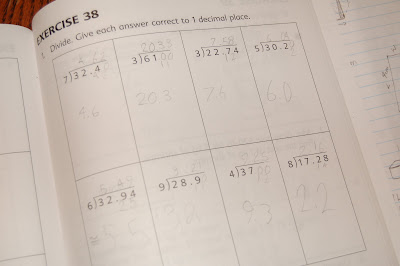 Ah, the family lexicon. Ours is bizarre and extensive, including such neologisms as “threehead,” “agilitous,” “wobbits” and “clape.” We come by it honestly. My dad referred to the white residue left on one’s toothbrush as “spinge.” We carry that one forward in homage.

For the most part we remember where the words came from and we’re all careful to keep these words within the privacy of our weird family conversation at home. But occasionally a word becomes so much a part of our lives that one or another of us is no longer aware that it’s not universally understood. Such was the case with the gazinta bar.

And when it comes to long division, we use the measurement model. We draw this symbol: it’s a right parenthesis with a horizontal bar attached to the top of it, extending to the right. It’s a gazinta bar, because we use it when we’re figuring out how many times 9 gazinta 28.9. I coined the word back when Erin was working in Singapore 4B I think. I thought it was pretty clever. It was a reminder of which conceptual model of division we needed to use when doing larger problems or those involving remainders or decimals.

Except that I realized today, after months of working with Fiona on various forms of division, that I had never explained to her the derivation of the word, nor that it was a family neologism. She was just matter-of-fact calling it a gazinta bar, as easily as she might have called it a widget or a scuzzlewhit. When I explained that our liaison teacher wouldn’t have a clue what we were talking about if we used the term, and in fact that no one in the world outside our family would have any idea, she started laughing her head off. We googled it to be sure. Indeed, no relevent hits. This term is ours and ours alone.

Except that now we’ve both gone and blogged about it. So now all of you know.

7 thoughts on “The gazinta bar”