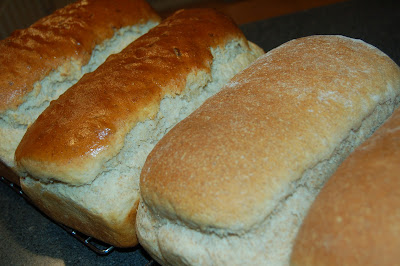 The new thermometer is making easy work of the bread oven. In the past I have over-fired the oven. I’ve burned it too long and with too much wood, so that is has got too hot. This has meant that pizzas are done in 5 minutes and over-done in 5 minutes and 28 seconds. Which is a fairly critical difference since it takes at least 28 seconds for me to get the door off and fish out the pan.

Today I tried out the thermometer for the first time. I fired the oven with some kindling, a few two-inch diameter small logs and two average sized pieces of birch firewood, burning for a total of about an hour and three-quarters. Then I raked out any of the bigger coals and pushed the small ones to the edge of the oven (thanks for the tip, Jacinda!) and threw in the first pizza.

Today’s breads are a whole wheat and khorasan blended yogourt bread on the right and a honey-garlic wheat bread on the left. I’m getting very adventurous with my bread-making recipes these days, just winging things with a rough formula of:

per loaf of bread, plus some combination of flours to make a dough that feels right when kneaded. I supplement with a bit of gluten flour if I’m using predominantly low-gluten flours (i.e. spelt, corn meal, oats or khorasan). And I make other adjustments, too, sometimes adding an egg or two, or using cottage cheese as a liquid and bumping up the volume, or increasing the sweetener, or adding seeds or herbs or nuts or dried fruit. I’m either developing some skill at this, or have been lucky recently, or else (more than likely) the oven enacts some sort of magic, because my loaves have been turning out beautifully almost no matter what oddities I throw into the mixing bowl.

We’ve just received the first half of our grain CSA order, so I am inspired on all fronts these days. The khorasan (a.k.a. Kamut®) is new to the CSA this year, our bin of hard spring wheat has been replenished, and I’m looking forward to getting more spelt and some heritage Canadian Red Fife wheat when the second half of our share rolls in in a couple of weeks.

3 thoughts on “The magic oven”